After Guilty Verdict Cosby Show Pulled Off Air, But Here’s Why Bill’s Supporters Are Outraged

For 80-year-old Bill Cosby, yesterday was most likely one of the worst he’s had in his whole eight decades of living. For those who missed all the headlines, Bill Cosby was found guilty on three counts of aggravated indecent assault against his accuser, Andrea Constand.

Needless to say, the guilty verdict has garnered an array of reactions from fans and celebrities everywhere. Reports also revealed the former “Cosby Show” star expressed outrage in the courtroom with an outburst of his own. However, he wasn’t the only one outraged. Apparently, Bounce TV wasn’t pleased with the verdict at all. Shortly after the verdict was announced, the television network released a statement that’s turned quite a few heads.

It definitely didn’t take long for Bounce TV to react to the verdict making their stance very clear: the network wants nothing to do with Bill Cosby. In an effort to distance the network from anything associated with the disgraced comedian’s legal situation, Bounce TV released a statement announcing its plans to sever ties with the “Cosby Show” altogether. According to Deadline, the network’s statement was basically a notice to let viewers know reruns of the famed sitcom were immediately being yanked from the network’s Thursday night lineup. “Effective immediately, Bounce is removing The Cosby Show from our schedule,” the digital network, owned by Katz Broadcasting, said in a statement to the publication.

Apparently, the guilty verdict was the last straw for Bounce TV. Several other networks opted to stop airing reruns of the show back in 2016 following the accusations of accusations of sexual assault and misconduct even though Cosby hadn’t been found guilty of any crimes at the time. Bounce TV was one of the few networks that opted not to cut the show based on allegations but now the damning verdict has definitely changed things. However, many fans have a totally different perspective on the situation. 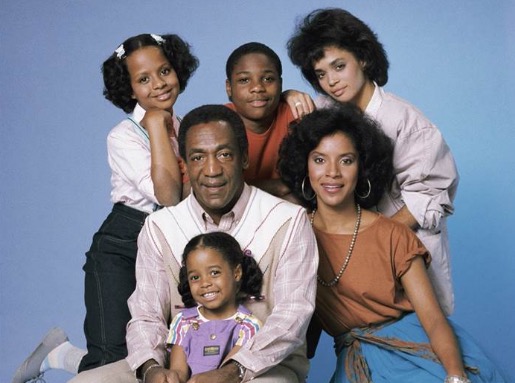 Although Bill Cosby actually admitted that he used to purchase quaaludes to give young women to have sex, many of the famed comedian’s fans are still outraged over the guilty verdict; not because he’s necessarily innocent, but the extent how his legacy has been tarnished. With all of the sexual misconduct allegations floating around in Hollywood, many African-American fans think Bill Cosby’s legacy is taking a harder hit just for that reason – he’s black.

Many fans have compared Bill Cosby’s situation to the disturbing scandal involving “7th Heaven” star Stephen Collins, who portrayed the family patriarch and, ironically, a pastor. For those who missed that, Collins – also a known pornography addict – was found guilty child molestation and he even confessed to exposing himself to three underage girls, according to a statement released by the NYPD.

But despite his confession to the mistreatment of underage girls, he’s a free man. White privilege much? Social media users think so. Some even mentioned Harvey Weinstein, Bill O’Reilly, and a few others who have been accused of similar misconduct but have yet to face charges. Other than stepping down from highly respected positions, many have yet to face legal consequences for their actions.

Since Bill Cosby’s verdict was announced, many fans have shared their reactions to the situation via social media:

Bill Cosby is going to die in jail while Stephen Collins (Eric Camden in 7th Heaven) is still a free man after having admitted he had inappropriate sexual relations with minors. Let that sink in. #WhitePrivilege

Not only has Bill Cosby’s legacy impacted his career but also the memory of “The Cosby Show,” itself. Fans argue that despite the conviction, the show should not have to suffer for Cosby’s actions. In Stephen Collins’ case, he never served time behind bars but Bill Cosby is facing a maximum of 30 years behind bars at the age of 80, which means he’d likely die in prison. In a nutshell, people aren’t justifying Cosby has done, but wondering why all the others aren’t facing the same consequences. Sadly, we’ll just have to see how it all turns out but unfortunately, we have an idea of how this all ends. Bill Cosby will probably be the only celebrity of his caliber behind bars for committing the same crime as others.