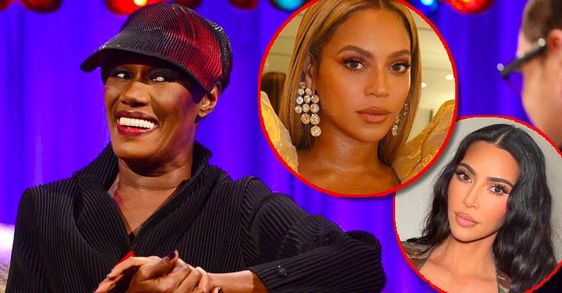 Alright y’all, this is yet again another Grace Jones shock-moment. If you haven’t heard yet, a few years ago Grace released her book, I’ll Never Write My Memoirs … and she had a hold lot to say about several celebs, let’s just put it like that.

One of the things she said was about Kim Kardashian. Grace just doesn’t respect this whole ‘Kardashian movement’ we’ve all been subjected to over the past few years. Here is what she wrote about the now infamous naked photos Kim released in Paper Magazine earlier this year:

“When he [photographer Jean-Paul Goude] took a photograph of Kim Kardashian with a champagne glass perched on her ass in an impossible pose like the ones he did with me over thirty-five years ago, I asked him why he was giving her – a basic commercial product – his ideas? This seemed to contradict his spirit of integrity, which he has protected for so long. Why was he repeating himself, just to give her a little flare of publicity, quickly absorbed by the next puff of self-promotion?”

“Well, he replied, ‘I got the feeling that if I didn’t do that photograph, she would have simply copied the idea anyway. I might as well copy myself.’ His ideas are are so powerful that repeating them decades later still causes a hell of a fuss, however temporary…He might have done it to wind me up a little as well. Which he did.”

The photographer played it smart I guess, by agreeing to photograph Kim and protect his legacy, although many would say he shouldn’t have given Kim any shine. Grace Jones also made a good point with her reasons as to why she thinks he shouldn’t have taken the photos. The thing that stood out the most to me was that Grace called Kim Kardashian a ‘basic commercial product,” I’ve gotta admit that her description was CLASSIC.

Kim K. is not the only celebrity that Grace called out in her book, she also threw some subliminal shots at Lady Gaga, Beyonce’, Rihanna, Miley Cyrus, Sia, Rita Ora, and Madonna. This is what she wrote about them…

Boom! If those aren’t shots fired, then I don’t know what it is! Grace is 73 years young and still refuses to censor her words or her freedom of expression, just to spare others of hurt feelings. Do your thing Grace, we see you!

After 47 consistent years in the music game, it’s safe to say that Grace Jones is on a level all by herself and she doesn’t take kindly to sharing that space. As a matter of fact, when Lady Gaga reached out to her earlier this year to ask her to do a song together, Grace replied “No” and she eventually explained why she didn’t want to work with Gaga: “From the very beginning I met her [Lady Gaga], I first thought her to be too affected – I thought she was still looking for herself.”

Ms. Jones is a trip, but that’s why we love her. Hell, that’s even why Lady Gaga and all of the other artists Grace blasted love her too…even if she can’t stand them.

Simply put, Grace Jones is like that aunt that you have, who you respect tremendously, but you know at any given moment during your family cookouts, she just might blurt out another relative’s private business just for the heck of it. Everyone in the fam’ knows how she is, but they excuse her behavior and love her anyway.
-ILoveOldSchoolMusic, old school news with a new point of view