Lisa Raye (best known to us old schoolers as “Diamond” in the “Player’s Club”) and rapper, Da Brat, are biological sisters with the same father, David Ray McCoy. Their beloved father was a paraplegic who was also a well known Southside Chicago businessman. David McCoy owned several hotels and nightclubs, and he was also known to lend money to hundreds of people who wanted to start their own businesses. Sadly, he was brutally murdered in 1988, and his daughters were left fatherless.  Detectives eventually found out that McCoy was killed over something so senseless… 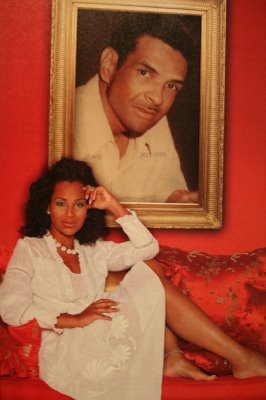 David McCoy (pictured in a framed photo in the above pic of Lisa Raye) was found shot to death on November 12, 1988 in the back seat of his Cadillac, which was parked in a Southside Chicago alley. He was 52 years old. McCoy's then 32 year old live-in girlfriend of 10 years, Sheila Daniels, and her then 20 year old brother, Tyrone, were convicted of McCoy's murder in 1990. Sheila was slapped with an 80 year sentence and Tyrone was hit with 60 years.

There are various reports of the motive behind McCoy's murder. According to Chicago Tribune, three of McCoy's other daughters, Jehlan, Morgan, and Cynthia, believe Daniels killed their father because she found out he was about to cut her out of his will. While other reports state that Daniels killed him after the two had an argument at their home over a high electric bill. Tyrone claimed he shot McCoy only after his sister, Sheila delivered the fatal shot to McCoy's head. They then drove McCoy's body in his Cadillac to the alley and left him there...so sad. SEE WHAT HAPPENED WHEN SHEILA DANIELS APPEALED HER CONVICTION THOUGH.>>>