When Halle Berry Shared Her ‘Different Looking’ Pre-Famous Photo, Fans Shamed Her Over It

Ever since Halle Berry played Samuel Jackson’s crackhead ex “prom queen” girlfriend in “Jungle Fever,” most of us, Berry fans, have been loving her. Throughout her highs — her historical Oscar win, the birth of her two children; to her lows — her three failed marriages and failed relationships (although she’s happily in love now) — fans have supported Halle. Well, that still holds true, but it’s a new day in age with the world of social media. Behind those cell phones and keyboards, folks get real gutsy with their reactions to celebs.’ Halle got a dose of that after sharing her throwback photo online a while back.

The Photo That Has Fans Going ‘Hmmmm…’

Halle Berry has been beautiful ever since the world was introduced to her during the Arsenio Hall Show era. Speaking of which, after seeing the throwback photo Halle once posted on Instagram, some fans thought it could have been filed under the Arsenio Hall Show’s “Things that make you go hmmmm…” category.

Halle once posted the below photo for ‘Flashback Friday,’ with a caption that offered great advice to her younger self:

“If I could give this young girl some advice… I’d tell her to do it all the same… no regrets. #FBF.”

That wonderful message was applauded by many, but for some it was completely overshadowed by Halle’s so-called ‘different nose.’ Check out Halle’s throwback pic below…

Halle has publicly stated that she fully embraces the process of aging gracefully, without plastic surgery. So y’all know people couldn’t wait to call her out on her ‘pre-fame nose,’ in an attempt to get her to own up to it…

aalij***** wrote, “Ok @halleberry you never had a nose job but you definitely had rhinoplasty lol. You and @vanessawilliamsofficial had two of the best rhinoplasty jobs I have ever seen on black people. Own it you looked good either way. Dorothy Dandridge had her nose done too. Along with Lena Horne and Etta Jones (not James). You are in good company lol.”

icxvii_***** wrote, : Oh please that is sooo obvious from before ad after … you had a tomato nose before and now [it’s] so narrow stop denying.”

ahh**** chimed in with, ” Wow Halle, you always said you never had anything done, and would never girl…jus sayin.”

Mass**** wrote, “The nose was way bigger back then it’s obvious, but you look pretty both ways.” 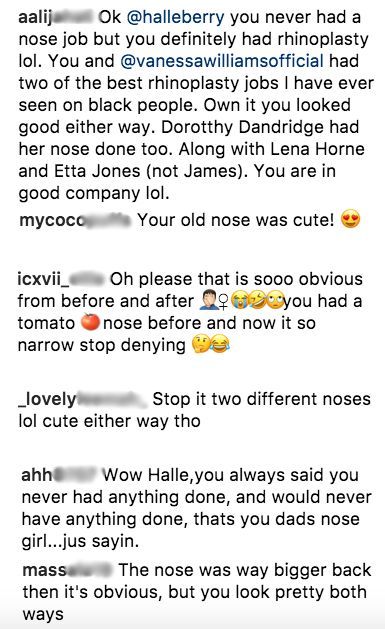 Does Halle look like she had a little nose work done? Possibly. But was she just as beautiful back in the day, as she is today, as a 55-year-old legend? Hell yes!

She Ain’t Got No Worries…Get Your Dance On Ms. Berry!

Halle owes no one an explanation and hopefully she’s still enjoying her day, even after the plastic surgery shaming. As long as she’s happy, her nose controversy is a non-factor for her. Moral of the story is: Do what makes you happy and if you choose to own it, so be it…if not, that’s all good too- it’s your life…live it.