ILOSM fam’ if you know about Black 90’s sitcoms, then you are more than likely familiar with actress, Reagan Gomez-Preston. Now, I’ll be the first to admit that I- like some of you- did not know her by name for many years, but I certainly knew her face and I even remembered her as “Zaria.” Remember “Zaria,” Robert Townsend’s ‘TV daughter’ on The Parent ‘Hood sitcom? Or maybe you recall her as Flex’s youngster sis’ on the sitcom, One On One.

Reagan also was the voice of “Roberta Tubbs,” “Cleveland Brown’s” stepdaughter in the hit animated show, The Cleveland Show, from 2009 to 2013.

Now that we’re all up to speed about Reagan Gomez-Preston’s past career, let us fill you in on her current grown n’ sexy status as a businesswoman, wonderful mother, and devoted wife to her hubby and their two children… 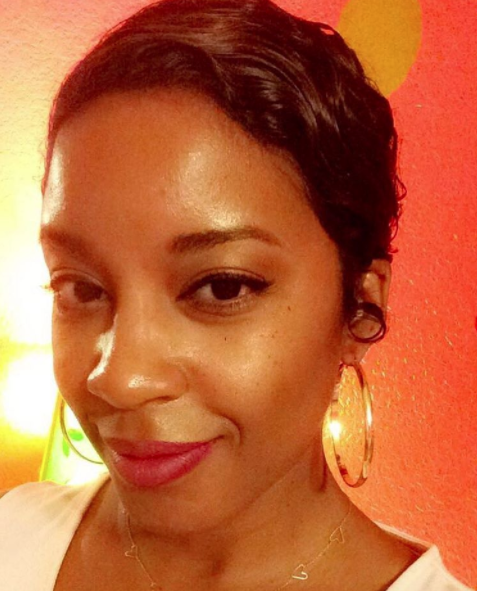 Currently Owns Her Own Production Company

Back in Nov at the #GothamAwards

Although Reagan doesn’t look like she’s aged at all since her teen years, today she’s 38 years old and running her own production company, RGP Productions. Her company’s popular sci-fi web series, Surviving, was recently nominated for a Gotham Award and although she didn’t win, she was just as grateful for the recognition of her hard work.

Regan took the initiative to start her own production company due to a lack of roles for people of color in Hollywood. She’s clearly not one to sit around and wait for opportunity, instead she created it herself.

That go-getter trait is one Reagan may have inherited from her Puerto Rican mother, Cheryl Gomez, who, as a police officer with the Detroit Police Department, was one of the very first women to ever be assigned to street patrol. Unfortunately, after several racial and sexual harassment occurrences on the job, Cheryl quit the force, filed and won a sexual harassment lawsuit between $800,000 and $1.2 million against the Detroit Police Department. Reagan’s African American father, Bennett Preston, is a medical examiner/pathologist in Philly…

Their daughter, Scarlett Annette Turrentine (born May 13, 2007) and son, Tyger Attila Turrentine (born April 2, 2011) are cute as can be. Swipe left on the Instagram posts below, to see pics of both of their son and daughter…

Now let’s talk about Reagan’s husband and kids. Her husband, DeWayne Turrentine, whom she’s been married to for 19 years (1999)…

Just had our 16yr wedding anniversary. We were 18 & 19. We banged #TheChronic there & back. 2 kids later. You tha best @goldenchildprince. Love you.