After Blaming Robert Downey For Robbing Him Of Millions, Terrence Howard Forgives Him

Empire’s head honcho, Terrence Howard, had a serious problem with actor, Robert Downing, Jr. in recent years. In fact, he put the dude all the way on blast in interviews and such. What was their beef about? It was about Robert jackin’ Terrence out of millions- $100 million to be exact, according to Terrence. We’re a little tardy for the party with this update on their repaired friendship, but better late than never.

Why T. Howard Accused Downey Of Robbing Him

It all started when Terence Howard was the highest paid actor on the first installment of the Iron Man movie franchise. He was paid $3.5 million at the time, with another $5 million waiting for hiM in the wings if ever a sequel were to be made.

That’s where Downey comes in, Terrence revealed to Rolling Stone magazine (in 2015), that the producers didn’t wanna do business with Downey because of his past drug issues. Howard then told them he’d take a $1 million pay cut if they gave Downey a shot in the movie. “Robert was so thankful and dadadadada,” says Howard. 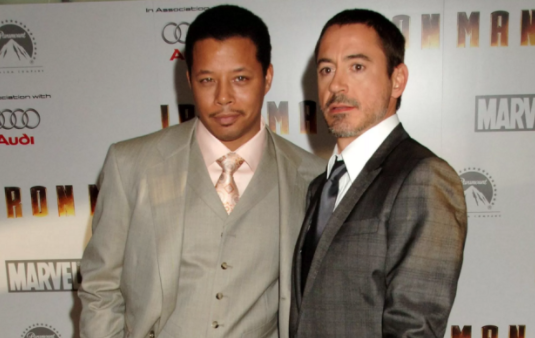 By the time it was sequel time (Iron Man 2), Terrence blasted Downey for leaving him high and dry. He says his agent got a call, telling him they were cutting his role down and reducing his pay. Howard said his attorney shot them down by saying “F**k you,” and hung up the phone.

The next day actor, Don Cheadle, took Howard’s spot for Iron Man 2.  Howard said he then reached out to Downey for help to get his role back, thinking that Downey would help him in the same manner he’d helped him for Iron Man 1. Then this happened:

Via Rolling Stone: “And so,” [Terrence Howard] says, “I called Robby and was like, ‘Look, man . . .’ Leaving messages with his assistants, called him at least 17 times that day and 21 the next and finally left a message saying, ‘Look, man, I need the help that I gave you.’ Never heard from him. And guess who got the millions I was supposed to get? He got the whole franchise, so I’ve actually given him $100 million, which ends up being a $100 million loss for me from me trying to look after somebody, but, you know, to this day I would do the same thing. It’s just my nature.”

Fast forward to today and many millions later, plus a hit TV show on Fox and our man, T. Howard has officially forgiven his former friend-turned-rival-turned-friend-again. Last year (2016), Howard posted the below Instagram photo of him and Robert Downey at a friend’s wedding, with the caption, “Nice to see my old friend again… #lifestooshort #allgood.”

Guess time really does heal all wounds…or maybe it was the extra millions Howard went on to earn, that made it a little easier to forgive and forget.