Easter weekend kicked of with a bang for Mr. and Mrs.Steve Harvey…and not in a good way. Steve’s wife, Marjorie, pissed off many of their fans, over the way she (seemingly unintentionally) offended many mentally challenged people. Steve then had to come to her defense.

What Had Happened Was…

So, what had happened was that on Saturday, Steve and Marjorie were having a chill time at their home and Marjorie decided to post one of their kitchen moments on Instagram. It was a video of them playfully disputing who cuts beets better- Marjorie or Steve. During their video, Marjorie said:

“I’m sitting here arguing with my husband, ’cause clearly, he thinks I’m retarded [and] I don’t know how to cut a beet.”

It was Marjorie’s usage of the word, “retarded,”that had many people jumpin’ all over her for offending those with disabilities. Marjorie’s playful description didn’t seem to be an intentional mocking of people who are mentally challenged. However, for many who are/or have loved ones who are mentally challenged, using the term, “retarded,” is oftentimes no different than a non-Black person playfully using the term “nigger.” That’s why fans immediately flooded Marjorie’s IG post with comments to check her. But Steve Harvey was quick to jump in and defend his wife…

Steve Harvey Claps Back At Fans 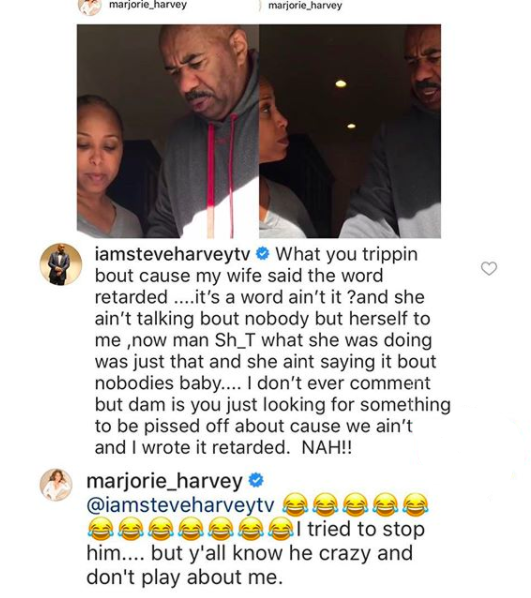 Steve Harvey’s clap-back: “What you trippin bout cause my wife said the word retarded ….it’s a word ain’t it? and she ain’t talking bout nobody but herself tome, now man Sh_t what she was doing was just that and she ain’t saying it bout nobodies baby…. I don’t ever comment but dam is you just looking for something to be pissed off about cause we ain’t and I wrote it retarded. NAH!!”

Fans Clap-Back At Steve AND His Wife

Y’all already know, Steve Harvey is just now getting back on the right track with many of his fans, after they told him to kick rocks, following his Donald Trump support fiasco. So once he decided to jump in and stand up for Marjorie, they were all over him like white on rice. Check out a small sample of the comments below…

tonypenny1968: Remember when you decided it would be a good idea to meet with president-elect Donald Trump and then participate in a photo op with him? Remember when people called you a coon and an Uncle Tom because of it? Remember how that made you feel? That’s the same sting that people with special needs and their loved ones feel whenever someone uses the word retarded. Steve I love your humor, your relentless work ethic, and your commitment to the community. I just wish you could understand why this word is so hurtful. Happy Resurrection Sunday.

oakssuzanne: Just lost all respect for you😔so beyond disappointed by your choice of word used and your thinking upon this situation that you choosed this word. Pure ignorance. Stupidity would be a better choice of words. Not a disability!!! Expected backlash. #momofdschild #retartardusedfreely 🙁

sry_mrs.jackson: @iamsteveharveytv It’s an issue because retarded is a word used to mock those with mental retardation. You don’t have to calling a being who had disabilities retarded in order for it to be offensive just like a white person doesn’t have to call a black person a nigger in order for it to be offensive. Being that I have a son with special needs I hate that word and yes I use to say it until I had a child and understood the term. I literally had to have this convo with my sis-in-law who always uses the word slow. She’s always like man you slow lol. But it’s not funny when you are using someone’s disability as a mockery even if the person your not talking to isn’t “slow”.

There were some who agreed with Steve as well and voiced comments similar to this:

robinfromjersey: @iamsteveharveytv AINT nothing wrong with the way your wife used the word retarted. I’m agreeing with you!! People are so uptight. Love you guys!!