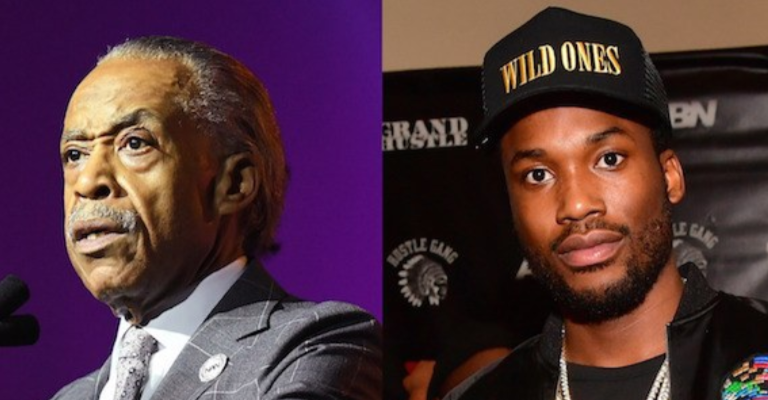 Meek Mill’s incarceration has sparked heated debates all over social media and now civil rights activists are even stepping in to join the fight for justice. Yesterday, it was reported that Rev. Al Sharpton would be making his way to Chester State Correctional Institution in Pennsylvania where Meek Mill is serving a two-to-four-year sentence for violating his probation. It looks like Rev. Sharpton is determined to get to the bottom of the situation in an effort to shed light on a flawed criminal justice system known for coming down harder on black men.

Shortly after visiting Meek Mill, Rev. Sharpton appeared alongside Meek’s attorney, Joe Tacopina, for a press conference in Chester, PA. He offered a few details about his discussion with the incarcerated rapper. “If you can do this to a successful artist like Meek Mill, you can do this to many around the country. “I came because I feel that Meek represents thousands of people in Pennsylvania, and even tens of thousands around the country, that have been victimized by abusive probationary and parole systems.”

I️ just visited @meekmill in Chester, PA with his attorney and we held a media availability following the visit

Check out the press conference:

The latest report follows the release of Rev. Sharpton’s first statement about Meek Mill’s legal battle. On Saturday, Nov. 25, he released a statement on behalf of his organization the National Action Network. Rev. Sharpton explained how Meek Mill represents the many African American males who find themselves facing legal injustice without proper representation only to be thrown behind bars with excessive sentences that do not fit the crimes they’ve committed. “Just because someone does something that is wrong, does not give you the right to do wrong to them. The sentence must fit the violation.”

Meek’s attorney is appealing the prison sentence. It has also been reported that Meek Mill is open to receiving help from Rev. Al Sharpton. So it looks like there’s a legal war about to take place and Meek’s team isn’t backing down.