If you hadn’t heard about the ongoing tension between Tyson Beckford, and Chris Brown, here’s the breakdown of their situation. At first glance it probably seems a lil’ odd that a 46 year old supermodel is going at it with an R&B singer young enough to be his kid at 27 years old. But when you get the backdrop of their beef, you’ll understand why.

Tyson was recently on Watch What Happens Live with Andy Cohen and let the verbal shots ring out at Chris Brown, which is a lot more safer than the actual shots he let ring out a couple years ago. We’ll explain…

According to Hollywood Life ‘Kid Red posted an Instagram video on May 24 and left a message for Tyson that Chris appears to have endorsed. The message read: “MEMORIAL DAY WEEKEND aka the ni***s will be out. .. We just came to party tho , unless a ni***a wanna try us … And that includes u model ni***s “Cough Cough #TysonBeckFord, we see everything LiL n***a” #DontPlayYaSelf. #CedarBlocka#FruitTownPiru #OHB #FillmoeNi***[email protected]”’

Then Brown took to Twitter to join in on the threats and bashing over the Karrueche selfie: 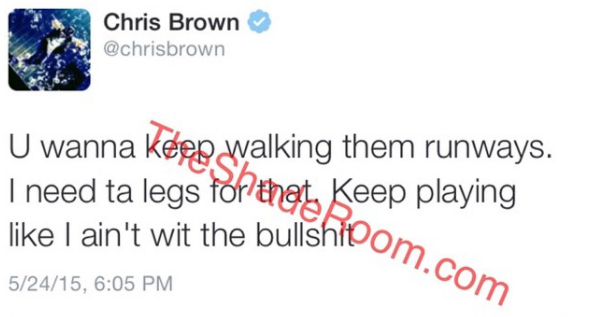 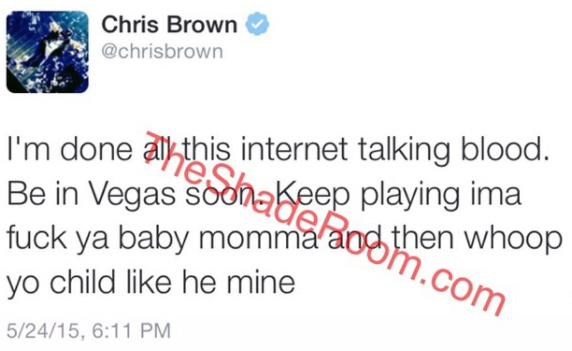 Soon after Brown’s posts, Tyson made his stance known by posting a subliminal video of himself practicing his firing aim at a shooting range. Beckford then followed that video up with a Facebook video message:

Via HollywoodLife: Tyson took to Facebook to basically say what the gun video proved — that he’s not scared of anyone threatening him. He says, “You n****s are on my d**k right now. F*** you n****s. I’m scared of y’all?” 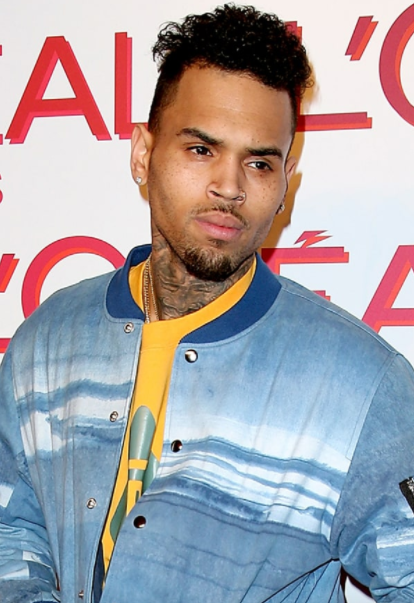 Chris then apologized for starting the beef in two tweets that read:

While it was great that Chris Brown manned up and apologized, that doesn’t mean Tyson is gonna forgive and forget. Here we are two years later and the tension has not faded from Tyson Beckford’s point of view and understandably so, because you just can’t say some foul stuff about a person’s kid and expect it be water under the bridge afterwards…

Smooth but a Savage when needed! Find a man that can do both. #gq #2a #america #ar15 #glock #bodyarmor #menofnash #tysonbeckford #teamtyson #556 #9mm #beard #beardgang

When WWHL host, Andy Cohen, posed a hypothetical scenario/question about he and Chris Brown, it was no surprise that Tyson didn’t hesitate to take shots at Chris about alleged drug usage and the nonexistent respect he has for Brown:

Andy Cohen: “What would you do if you were stuck in an elevator with Chris Brown?”

Tyson Beckford: “One of us is coming out alive and it’s me. I still don’t got no respect for the dude, I feel bad for him. Drugs is a [bleep]. I think he really needs to check himself for that. It’s probably out of his control, but it is what it is.”

And there ya’ have it ILOSM family. Every now and then an Old Schooler’s gotta put a youngin’ in their place and keep it moving. Peace to both of those brothas though…although it’s probably just a matter of time before Chris lets his Twitter fingers loose and replies back to Beckford…again.