All GROWN Up! Sean ‘Puffy’ Combs SON Goes To Prom With His BEAUTIFUL Bae!

Sean “Puffy” Combs has six wonderful children and fans have had the pleasure of seeing them all grow up right before our eyes. The Bad Boy Records’ CEO’s kids are a prime example of how fast time flies.

It seems like yesterday they were all Puff’s lil’ mini-me’s posing with their Pop and Mothers on the covers of magazines and on red carpets. Now, his youngest daughter is approaching junior high and his youngest son, Christian Combs, recently made his way to prom – again.

On Apr. 4, 2017, Christian – who goes by KingCombs on Instagram – shared a photo of his epic night when he escorted his longtime girlfriend, Breah Hicks, to prom. Although the 19-year-old graduated from high school last year, he wasn’t about to leave his girl hangin’ on her big night.

The two wore matching cream attire and their swag was on level 10. They also posed for the traditional prom pictures before hopping in a black Rolls-Royce for the big event.

Needless to say, the couple looked stunning for prom night, and most Bad Boy fans agreed. In fact, many complimented Christian and his beautiful girlfriend.

Snappin’ and cheesin’ for the ‘Gram…

Photos were also shared then (see throwback pic below) and it’s amazing how much Christian has grown over the past two years. He no longer looks like a shy little boy. He’s definitely a grown man now and as you can see in the photo above (with he and Breah on the stairs) he’s checkin’ out his woman like she’s stack of pancakes on a plate or something, LOL. Gotta luv the puppy love! 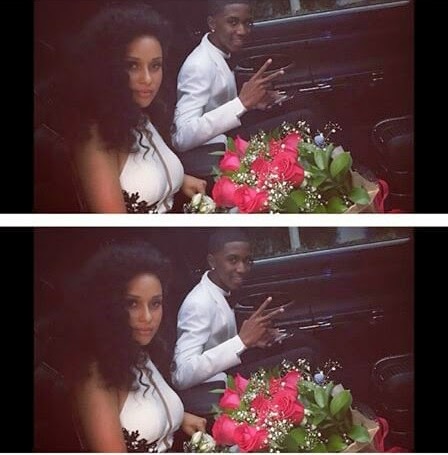 An Old School fist bump to Puffy and Kim Porter on the cool young man their son is becoming and a handclap  for Christian Combs and his girlfriend for gettin’ their shine on at their prom. Now on to carving their space in the world as successful, ever-evolving, young adults. Much luck to them and the bright futures ahead of ’em.