Bette Midler is many things- a woman, a music legend, an acting legend and nowadays she’s also a celeb’ known for pissing people off on Twitter with her insensitive, ill-informed comments.

First she rejoiced because Joe Jackson (patriarch of the Jackson family) died a few months ago and got dragged by fans from here to Timbuktu. Now, lo and behold, she strikes again and this time she just may need real “wind beneath her wings” to keep herself afloat over the endless backlash she’s getting about her latest tweet.

She’s incorporated the “n-word” into a rant about women and fans have now commenced to draggin’ her from here, to far past Timbuktu….ALL the way to Wakanda and back.

The other day, Bette, thought it’d be a good idea to compare the plight of all women (of all races) in America to that of African American people and the centuries of systemic and blatant, murderous racism that still exists today. In doing so, she compared being a woman to being viewed as a ‘ni&&er.’ Here’s what she originally tweeted and then deleted…but not before screenshots of it were already grabbed:

“’Women, are the n-word of the world.’ Raped, beaten, enslaved, married off, worked like dumb animals; denied education and inheritance; enduring the pain and danger of childbirth and life IN SILENCE for THOUSANDS of years They are the most disrespected creatures on earth.” 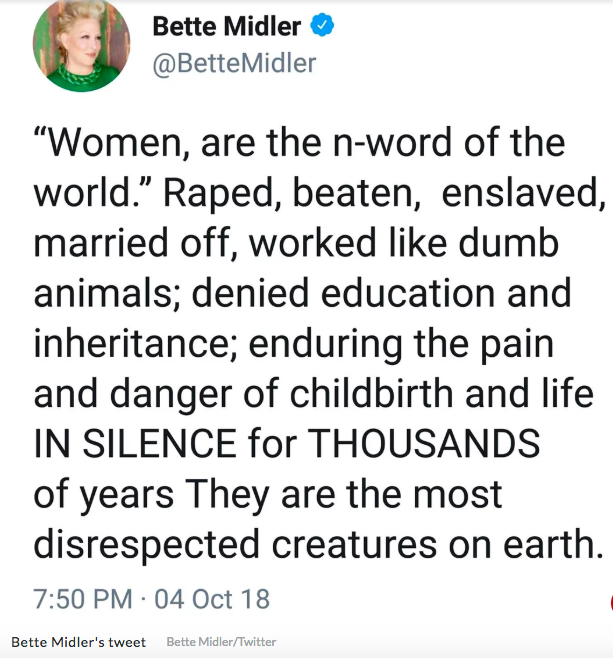 “The too brief investigation of allegations against Kavanaugh infuriated me. Angrily I tweeted w/o thinking my choice of words would be enraging to black women who doubly suffer, both by being women and by being black. I am an ally and stand with you; always have. And I apologize.”

Bette Midler’s tweet came in the midst of the D.C. protest, that took place on Thursday, in protest of Trump-supported/alleged sexual assaulter, Brett Kavanaugh, potentially being inducted into the Supreme Court.

Soon as many of Bette’s Twitter followers (of ALL races) caught wind of her ‘ni&&er’ tweet, many of them wished that she could catch the virtual verbal beatdown they delivered to her:

@rosaclem****: To use this saying which has been deconstructed and deemed offensive to African-Americans in this country shows lack of knowledge on issues of race and concept of intersectionality. It also denies Black women agency. I would urge you to read Bell Hooks, June Jordan.

@NoisyAstron****: “NOOOOOOOOOOOOOOOO … Please stop. I am 100% a feminist but this is quite is awful. It erases the struggles of black women in particular. We HAVE to do better than this or we uphold the very systems of oppression that we are railing against.

Then Bette tried to come back and defend her “n-word” tweet, by attempting to reference a Yoko Ono quote, in yet another deleted post:

Via People: Midler wrote that she “never forgot” Ono’s statement from 1972, adding, “It rang true then, and it rings true today, whether you like it or not. This is not about race, this is about the status of women; THEIR HISTORY.”

And she received more of the same responses from fans, who called her on the B.S.:

@j_yvo****: Sighs…its so disappointing to see you use that quote. Women are highly disrespected – but don’t displace the atrocities that were done to black people by using that quote.

You’re gonna have to come better than that Bette…just sayin.’