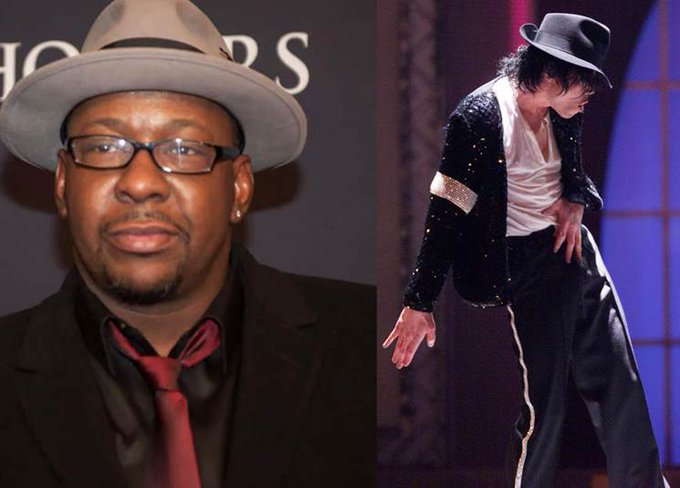 We all know that back in the 80’s and 90’s, Bobby Brown was known as the best dancer/performer to hail from New Edition, but his newly resurfaced claims are stirring a lil’ controversy. A few years ago, we’d reported that Bobby B. claimed he taught the iconic Michael Jackson how to do the infamous “Moonwalk.” Fast forward to now, and Bobby B. is still claiming that title in a new interview with rapper, Fat Joe. There’s just one discrepancy though. You see, we’d also reported that there was actually another R&B legend who’d long ago claimed dibs on that honor, before Bobby. So we wanna know what’chall think about this. Read on to see what Bobby said and who the other supposed “Moonwalk” legend is…

“He perfected but I talked him how to do it” pic.twitter.com/TCPkvf86DB

Bobby told Fat Joe that New Edition had been invited to MJ’s crib when they were just starting out in the 80’s:

That’s when the magic supposedly happened with Bobby taken a moment to show MJ how to do the dance…and he even says he has witnesses:

“Michael [Jackson] asked me to show him how to ‘Moonwalk.’ This is a true story, you can ask Michael Bivens, Ronnie DeVoe, Ricky Bell, Ralph Tresvant…Johnny [Gill] wasn’t there yet. … I showed Michael!”

When Fat Joe asked if Bobby was “insinuating” that he taught MJ the ‘Moonwalk,’ the “My Prerogative” hitmaker made one thing clear:

“And we can bring Ralph Tresvant, BBD all on [this IG Live interview], because they was all there at the time when I was showing Michael [Jackson] how to do this (‘Moonwalk’). … They were all there, [we were] in the foyer of his house.”

Bobby then stated that the only time he’d performed the “Moonwalk” was in dance battles, during his days as a break dancer.

We previously reported the claims of singer/dancer, Jeffrey Daniel (pictured with Shalamar group members, above right), of the legendary R&B group, Shalamar. He long ago claimed to have been the man responsible for teaching MJ the “Moonwalk” at the Neverland Ranch in the 80’s. Also, like Bobby B., the brotha’s dance skills are on level 1000. *Fun fact: Michael and Jeffrey also have the same taste in women….as in the same R&B songstress (read about that HERE)*…but I digress…

Via NPR: [Jeffrey Daniel] says that [Michael] Jackson came to Disneyland with “little” Janet Jackson in the early 1980s. “They stood on the wing of the stage and they watched me dance. […] And then I got a call from him. He said that he would like to get together and … go over the dance moves and that.” Daniel says even Jackson didn’t get the moonwalk right way. “No one” does, he says.”It’s like the matrix, everybody falls the first jump,” Daniel says. […] Daniel says he was struck by Jackson’s athleticism and entertaining ability when he was a child and a teenager. “And then to see him take what we were doing and then take it into his arena — take it into the next stratosphere — it was like, ‘Wow,'” Daniel says.

Not sure who to believe now, but I must say that Bobby’s details do sound pretty convincing.

ILOSM fam’ who do you think taught Michael how to “Moonwalk”- Bobby Brown, or Jeffrey Daniels?