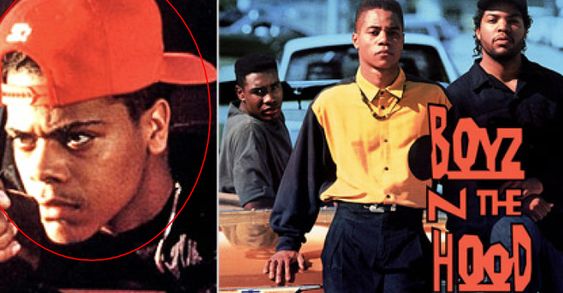 Most of us never knew his name, but we knew his face from his small, but memorable role in Boyz N’ The Hood. His name was Lloyd Avery II (pictured in the above photo, left). Lloyd’s Boyz N’ The Hood character was the street thug who killed “Ricky” (Morris Chestnut) as he was running for his life down that alley, on his way home from picking up a few groceries from the store.

Well, Lloyd unfortunately ended up living out that real-life scenario in several ways. His actions landed him in prison, serving time for a double murder. And sadly, he ultimately was murdered in 2005. Lloyd’s brother – actor Che Avery – shared details on how Lloyd went from being an up-and-coming actor –from a quiet middle class neighborhood– to a real-life gang member: (courtesy of King Magazine)

Che [Lloyd Avery II’s brother and actor] remembers the helicopters being louder than usual and seeing a lot of foot traffic out front. Lloyd was with his bike in the kitchen, where he gave his brother a hug, last night’s situation already forgotten [when Lloyd almost confided in Che that he had just killed 2 people], and then left through the back door. Riding on Crescent Heights Boulevard, he made a U-turn and pulled up to the driver’s side of a police car.

Lloyd leaned down, brazenly asked, “What’s up?” and released his grasp from the handlebars of his aluminum Mongoose. The officer opened his door, and Lloyd stumbled. He quickly recovered and sped west in an attempt to elude the cops but soon collided with another police vehicle. He was arrested for a double homicide.

At the time of his capture, the 30-year-old actor was finally landing some work. He made his name in a small part in Boyz N the Hood, but was quickly sidetracked. Earlier that summer, Lloyd booked back-to-back features, the Master P produced Lockdown, and Shot, where he also served as a technical advisor. In the latter, he played “G-Ride,” a menacing yet charismatic gang member. To those who knew him then, it wasn’t much of a stretch. But to others, it just didn’t make sense.

His brother did not understand his new “gangster” ambitions:

“He was kind of meek,”says Malcolm Norrington, who played Knucklehead No. 1 to Lloyd’s Knucklehead No. 2 in Boyz. “He was not anything near a street guy. Within a year of Boyz, I was hearing about him missing auditions. I don’t remember when I heard about him joining [a gang]. I just remember being perplexed. To me, it was like, ˜What is he doing Blooding? Lloyd? C’mon.’”

Indeed, shortly after Boyz, Lloyd baffled those closest to him by leaving his middle-class neighborhood for the Jungle, a heavily Blood-affiliated area between La Brea Avenue, Crenshaw Boulevard, Santo Tomas Drive and Coliseum Street. Lloyd embraced his new home, tattooing the word “JUNGLEZ” above his left eyebrow.

“Instead of just being a Hollywood-like studio gangster, he was living it,” Che says, speaking from his mom Linda’s house. His voice, a soulful, gruff twang, is contemplative. “My brother turned into a for-real for-real gangster.” Apparently, Lloyd Avery never got over playing “Knucklehead No. 2. … I like to call it the Tupac Syndrome,” Che says. “He felt like he had something to prove when he really didn’t. Even if you have money and fame, you will sacrifice all of that just to have respect from a bunch of thugs.”

But unlike Pac’s demise under the glitz of the Vegas strip, Lloyd’s murder was far from glamorous. He was killed by his Satan-worshipping cellmate in Pelican Bay State Prison. Outside of his family, it wasn’t really news. Not even to the corrections officers who took two days to discover his body.

It’s a tragic situation and there were clearly some deeper issues going on with Lloyd Avery II, but it’s just like the Old School saying goes: ‘You live by the sword, you die by the sword.’