A wise person once said “We’re all only one bad decision away from being in prison.” That was certainly the case for “A Bronx Tale” and “Sopranos” actor, Lillo Brancato (40), except Lillo made more than a few bad decisions that landed him in prison for several years. When you see what he served time for, you’ll probably say to yourself ‘What in the HELL was this dude thinking?!!’ Check out the bad decisions that landed Lillo Brancato in the pen’…

In 2005, just a few years after his stint on the former popular HBO series, “The Sopranos,” Lillo committed a crime that changed his life forever. He served a 8 years out of his 10 year sentence for first degree burglary charges, where 28 year old off duty New York police officer, Daniel Enchauteguithe (pictured below), was shot and killed.

“On December 10, 2005 I wasn’t the best person. And I made horrible decisions. And my [heroine and morphine] drug addiction and my bad decision making definitely contributed to the death of that heroic police officer, and I take full responsibility for that,” said Lillo.

Lillo said he did not pull the trigger, and that his accomplice, Steven, (who was also the father of his then-girlfriend) shot the officer during the burglary. During their 2008 trial, it was stated that the two broke into a home next door to officer Enchauteguithe’s residence. They were trying to burglarize the place, but Enchauteguithe heard them and ran outside to investigate. When he spotted Lillo and Steven, they had a shootout, but Lillo said he didn’t have a gun and that he didn’t know Steven had a gun until he started shooting back at the officer. All three men ended up shot and in critical condition. Lillo and Steven were found a few blocks away by police, bleeding from their gun wounds, both survived, but Enchauteguithe did not.

The jury convicted Steven to life in prison without the possibility of parole.

In a prior interview with The Breakfast Club, Lillo said they were robbing the place because they were heroine addicts at the time and their drug dealer ran out of drugs, so they robbed a home that Lillo knew had prescription drugs in it so they could get high. But today, he’s fully sober, he’s extremely remorseful about the incident, and he realizes he made a horrible decision..

SISTER OF SLAIN OFFICER SPEAKS OUT 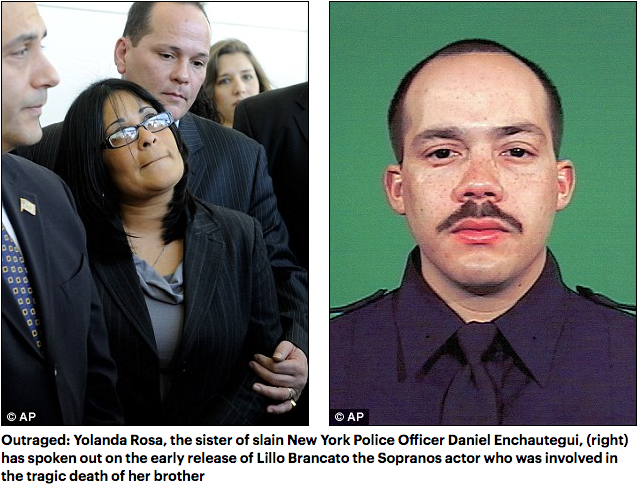 The New York City Patrolmen’s Benevolent Association also publicly voiced their outrage that Lillo Brancato was released from prison so soon after being involved in a burglary that left one of their officers dead.

Overall, Lillo Brancato was one lucky dude with a great attorney, because y’all know if that would have been just an average Joe with a state appointed lawyer and no money, he would have NEVER seen freedom again, regardless of if he pulled the trigger or not.  But in Lillo’s case, it pays to know folks in high places who can get you one of the best attorneys around.