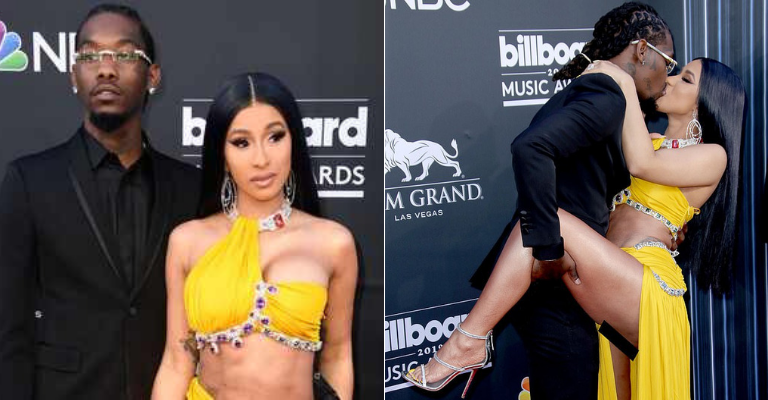 Cardi B is the type of artist who tackles rumors head on.

It didn’t matter that the Grammy Award winning artist was backstage at the Billboard Awards Wednesday – she had to let you guys know!

The 26-year-old rapper stripped off to just a tiny thong in a since deleted video. It was her way of addressing photos circulating online of her private parts allegedly being on show on the Las Vegas red carpet.

In the red carpet photo, Cardi kissed her husband Offset while lifting up her leg.

But online trolls soon photoshopped the image to make it look like she wasn’t wearing any underwear. Graphic images emerged online of the mother-of-one’s supposed genitalia.

Cardi said in the since deleted video for her 43 million followers: “Y’all motherf***ers going around showing this f***ing picture now y’all photoshopping it even more.”

“This Is Where I Birthed My Baby”

“This right here is where I birthed my daughter from. This right here the part when I go like this, that’s just my a**. You know when you got the fat a**,” the Bronx beauty continued.

Having previously worked as a stripper in her past – Cardi was not shy about showing off her body. However as she continued on her rant, her husband Offset hilariously walks in. He soon backs out when he realizes his wife is going in on her haters.

“Y’all wanna look at my p**** so bad, you should have seen me when I was a motherf***ing stripper and I was promoting myself like “come see me!” Now too bad!”