Chuck Berry Had A Criminal Past, But What He Did In 68 YR. MARRIAGE Is AMAZING 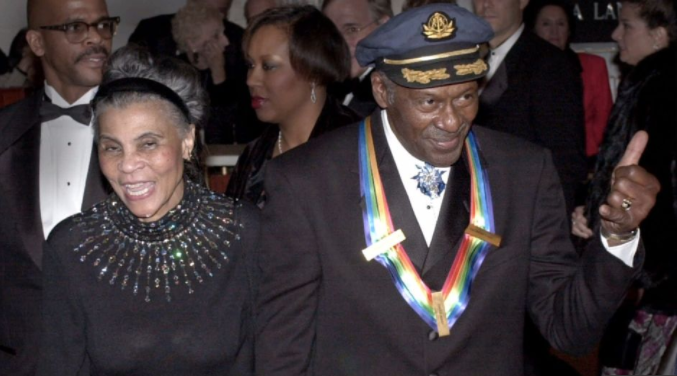 As the world continues to pay respects to the iconic rock n’ roll, legend, Chuck Berry, who passed away at age 90 on Saturday, March 18 (2017), we wanted to share some widely unknown facts about he and his wife of 68 years, Themetta “Toddy” Suggs, and their 4 children. They’ve been through thick and thin together. But through it all, Toddy’s stood by Chuck’s side and Chuck was forever grateful to her for that, which he oftentimes publicly expressed, as you will see below. His life is a great example of what we always say, here at ILOSM: that entertainers have accomplished great things, but that doesn’t mean they’re perfect, they’re simply perfectly flawed human beings, just like the rest of us regular folk. With that said, scroll down to find out what Chuck, Toddy, and their kids had to say about one another…

When Berry was in high school he served three years in Intermediate Reformatory for Young Men (outside of Jefferson, Missouri) for armed robbery. He served from 1944 to 1947, getting released on good behavior on his 21st birthday. A year later he married Toddy.

More Prison Time, Years Later, Wife Stayed By His Side

Over a decade after his prior prison stint, Chuck had acquired much fame and success and also a new prison sentence. In January 1962, Berry got sentenced to three years in prison for crimes committed under the Mann Act—he had ‘transported’ a reportedly 14-year-old girl across state lines. The thing that wasn’t as widely discussed is that the young lady was said to have been the ‘hat-check-girl’ at his St. Louis nightclub, Berry’s Club Bandstand. So was he simply giving her a ride, or was there more to it? Who knows? But despite it all, his loving wife, Toddy, stuck by his side.