Condolences: So Sad, Will Smith’s FATHER Passes Away…

Will Smith’s dad, Willard Carroll Smith, Sr., passed away on Monday, November 7th.
Will’s ex-wife/former “Hollywood Exes” star, Sheree Fletcher, posted a tribute to his beloved Pops on Instagram with a throwback photo of Will, his dad, and he and Sheree’s son, Trey (Will’s eldest child) with this caption: 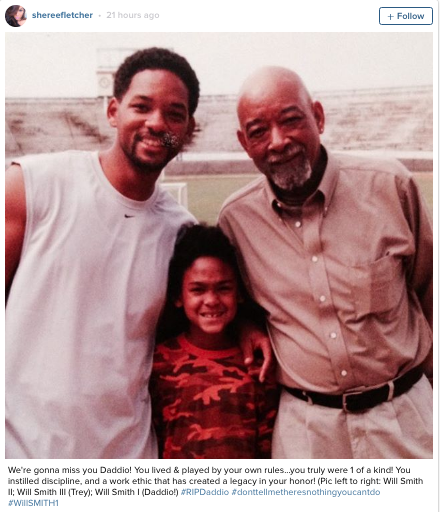 “We’re gonna miss you Daddio! You lived & played by your own rules…you truly were 1 of a kind! You instilled discipline, and a work ethic that has created a legacy in your honor!” the actress captioned the snapshot. “(Pic left to right: Will Smith II; Will Smith III (Trey); Will Smith I (Daddio!) #RIPDaddio#donttellmetheresnothingyoucantdo#WillSMITH1.”

Will and Jada haven’t spoken publicly on his father’s passing as of yet, understandably so, but our deepest condolences go out to their family during this time of grief. Will’s mother, Caroline Bright, is thankfully still here with him.

Reminiscing on growing up under his dad’s careful watch, Will once told Entertainment Tonight this about his relationship with his father:

“Dad was tough but not tyrannical. He kept me in line. He’d get this look that said, ‘One more step, Will, and it’ll get ugly.’ He was an independent businessman — he set up refrigeration in supermarkets — and he always provided for us. He’s a steady and positive figure in my life.”

In case you are familiar with Will and Sheree’s prior relationship, they were only married for three years and divorced in 1995, but Sheree maintained a great friendship with Will and later also Jada Pinkett-Smith.