Confessions: Tevin Campbell Admitted He’s “Try-Sexual”…Where Has He Been?

Can we talk?!? Tevin Campbell hasn’t been very visible in the past decade, just popping up here and there. Ironically, he did an interview in 2003, with Sister 2 Sister Magazine, where he admitted to having a “Try-Sexual” attitude towards sex…and after that interview, his fans didn’t hear much from him. However, since then he’s performed on Broadway and he’s done some sporadic concert performances within the past 10 years.

One thing’s for sure though- no matter what, he can sing circles around many of these “current” R&B artists out here! His tenor voice possesses a four-octave range…how many of these youngins can hang with that? Now, as far as what Tevin had to say about being what he described as a “try-sexual,” peep that info below…

Tevin Campbell’s Thoughts On Being “Try-Sexual”:

A wise person once said ‘living in your truth is good food for the soul.’ Well, we’ll be damned if Tevin didn’t make sure his soul had the breakfast, lunch, and full course dinner, when he publicly dropped his sexual revelation on his fans. Back in 2003, Tevin’s interview with Jamie Foster Brown had everyone talking. This was “Pre-Social Media,” but the effects of the interview have been long lasting. “Try-sexual,” as Tevin explained, is the best way to describe who he is. Below is an excerpt from Sister 2 Sister Magazine:

Jaime: You don’t want them to know what your sexuality is?

Tevin: Basically, I’m trying a lot of things. Being open-minded. It has nothing to do with attraction. It’s just having fun and I did a lot of that on the road with dancers. We had truth or dare.

Jaime: So you’re saying it could be male or female? Whatever is happening at that time?

Tevin: Right. I am not exclusively attracted to men. I’m not gay, but sexually…

Jaime: Would you say you’re bisexual?

Tevin: Leave that to the imagination.

When asked by SoulTrain.com if he would discuss his personal life, or if it deters him from wanting to be more open, Tevin said… 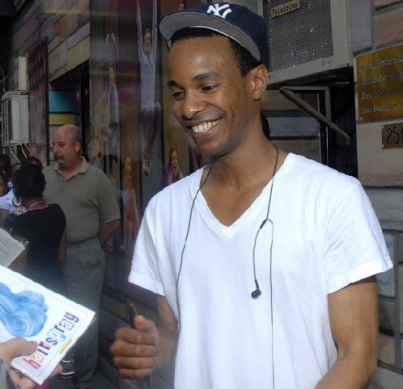 “I always say that I have to live my life for me. Everyone has to go home at night and live behind closed doors. No matter what you think you know about a celebrity and what they are doing, you truly don’t know. Everybody lives behind closed doors… As far as what I do in my personal life, if you get to know me then you’ll know. But I have friends and family that love me for who and what I am. I don’t need other people to love me for who I am, I need them to love me for my music and if they can’t do that then you’re not a fan. I divulge a lot in my album. I know the questions that people ask, so really the only way you’ll get to know me is through my music.”

That’s right Tevin…live life for yourself and to hell with what anyone else thinks. Now, Shhhhh, here’s video of Tevin ‘breaking it down’: