Damn, Daughter Of Tyrese & Ex-Wife Just Got Dragged Into Their Court Mess

This ugly situation between singer/actor, Tyrese Gibson, and his baby momma is going from bad to worse. In a move that Tyrese says may affect his 10-year-old daughter, Shayla Gibson’s, well-being, a judge has now ruled that their little girl can be dragged into a court battle that possibly puts her in a position to have to choose sides. 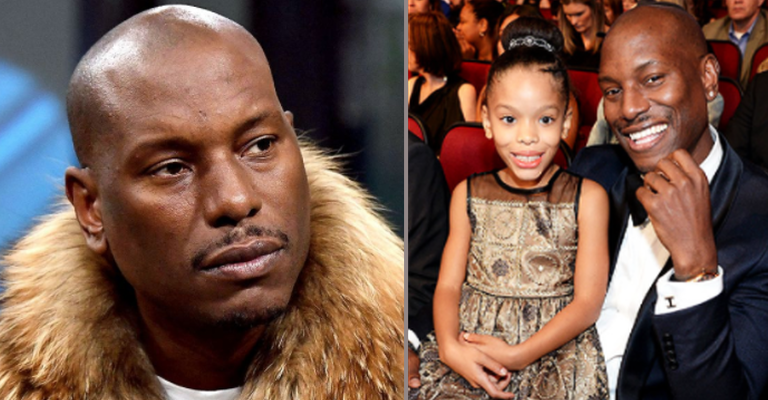 How Their Daughter Is Getting Dragged Into Drama

It’s just been reported that Tyrese’s ex-wife can call Shayla to the stand to testify about alleged child abuse. Norma Gibson accused Tyrese of beating their daughter, which led to an investigation by the Los Angeles Department of Children and Family Services. They are due back in court on Oct. 24.

Last month, Norma filed her complaints after she said Tyrese struck Shayla somewhere between 12 and 16 times, to the point where the little girl couldn’t sit down. Tyrese said Shayla’s lying through her teeth and that he only hit Shayla once on her bottom to reprimand her for doing something she shouldn’t have done. He believes that Norma is acting out of anger because he married his new wife on Valentine’s Day. Tyrese and Norma’s marriage was short-lived, lasting from 2007 until 2009. The divorce was rife with animosity and the custody battle was particularly nasty.

“She’s a lying piece of sh*t,” Ross said. “Tyrese is devastated. He’s a good guy and I will prove that.”

Tyrese Publicly Blasts Back At Ex-Wife

All I wanna do is co/parent nothing else…… Please…. Stick and stones may break my bones but words will never hurt…… I've only prayed that your heart heals and we live our lives separately and peacefully on behalf of our daughter…… There's someone out here for everybody – Norma I know you can see this, I'm sorry I got re-married, I'm sorry we didn't work out…… Sometimes you get married and have kids and things just don't work out, but I have NEVER wished harm on you……. But I see the attacks just won't stop so I believe this too will pass and God and the courts will reveal the truth….. I want you to know I still love you and wish you the best in all that you're looking to do… I just simply wanna co-parent and raise Shayla to be a respectful, decent, smart angel that I know she is… Paint your picture but God knows the truth…… if I was a bad dad I wouldn't of went from 80/20 to 70/30 to 60/40 to 50/50 custody in my favor…… All of the honorable fathers and parents out here keep fighting the good fight you may embarrassed at times but in the end the kids will always run into the arms of the ones who really has their backs in a great father not because I'm famous with money but because I am – that's my story and I'm sticking to it…. More truths coming soon……. Child custody family issues are the worst…….

Norma was granted a temporary restraining order, which she wants to make permanent. She says that Tyrese is a danger to her and their daughter, especially since what she claims was his recent diagnosis of bipolar disorder as well as manic behavior. The “Fast & Furious” franchise star responded to the allegations, in an Instagram post, addressing Norma directly.

“All I wanna do is co/parent nothing else… Please… Stick(s) and stones may break my bones but words will never hurt,” he wrote on Sept. 13. “…Norma I know you can see this, I’m sorry I got re-married, I’m sorry we didn’t work out… Sometimes you get married and have kids and things just don’t work out, but I have NEVER wished harm on you… But I see the attacks just won’t stop so I believe this too will pass and God and the courts will reveal the truth.”

You are #DaddysHeart my whole world my everything praying for you everyday cause you play for #TeamShayla…. See you soon love angel… And to the parents and angels of our world… Breathe before you attack, assume or become defensive….. Just ask yourself .. if I was really and truly what they say how could one possibly go from 80/20 to 70/30 to 60/40 to 50/50 custody in my favor……. in the end it's ONLY the kids that suffer when the parents are at it….. I hope someone out there decides to do it better than we did…. in the end I'm just going to try and ease my mind and relax and discover new heights of spirituality and cover to ride out this unexpected storm…….. I know this for a fact…. God is up to something and I've been raised to be very careful of what you ask for cause you just might get it – The real question becomes are you READY for the things you've been praying for? ….. This is NOT the season to lean on your own understandings…. Thank you father God for what's already done in the end you will always get all of the glory…… if you agree say #Amen

This situation can’t be easy on any of the parties involved. For Shayla’s sake, let’s hope that Tyrese and Norma can work it out. Their daughter’s future depends on it.