Decades Later, “Kissing You” Crooner Keith Washington” Is Making 61 Look Like The New 31

In case you’ve been wondering what R&B crooner, Keith Washington, has been doing since we last heard from him in the mid-’90s, today is your day, because we’ve found him. And these days, he’s puttin’ a lot of youngins to shame with his forever young swag. Keith is making his 61 years look more like 41.

But first, we have to reminisce about the days when Keith had us all slow dancing to his ’90s smashes, “Make time For Love” “Are You Still In Love With Me,” and “Kissing you.” Those were the days weren’t they?!! Keith had the ladies going wild and the fellas were reaping the benefits of it, by making some of Keith’s slow jams their mood music whenever they had their lady over to visit.

Above is a recent photo of Keith now, along with singer, Joe. As y’all can see, the brotha is representin’ us, Old Schoolers, well. He’s recently shared how he keeps himself healthy in the following Instagram message to his fans…

Fun Facts About Keith And His Personal Life

Keith is part of ’90s era crooners who had to know how to SANG (not sing) in order to gain notoriety in the music game…and he’s still been able to successfully ride that wave to this day. His career hasn’t come without it’s fair share of drama though.

Many of you may remember some years ago, that Keith was involved in a bit of controversy surrounding information folks were accusing him of leaking, on his prior Detroit radio show, regarding the health of his good friend, the late Aretha Franklin. Keith adamantly denied that he intentionally leaked that info, and that it was an honest mistake.

His married life had a few hiccups along the way, but nothing he and his exes didn’t eventually move past.

His ex-wife of 14 years, Marsha Jenkins-Sanders (not pictured), stirred her own dosage of controversy when she released what many refer to as a “fictional” tell-all book, The Other Side of Through, about her and Keith’s relationship and his alleged infidelities. I’m not sure that I actually understand what a “fictional” tell-all is though.

Keith later married his second wife, Stephanie Grimes Washington (pictured below), a former executive at a radio station in Detroit. They jumped the broom in 2009, but eventually divorced a few years later. Though they seem to be on cool terms, with Keith even confessing “I’m so proud of her” in a 2020 interview, following their divorce.

Other than that, Keith seems to be a pretty elusive type of cat, but here’s what we do know about him…

He hates the state of today’s music industry and the fact that love songs have become pretty much extinct…and I don’t blame him. What happened to ballads y’all?!! Here’s what he said… 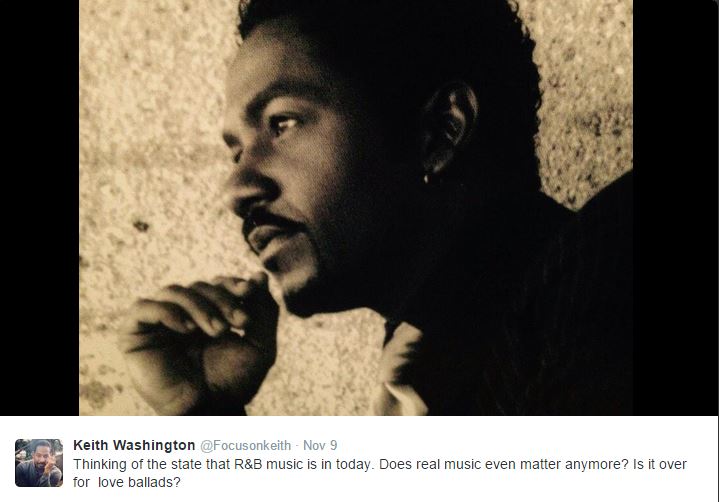 And he’s also starred in various stage plays throughout the years. Some of his past co-stars are heavyweights in the game as well, including actor, Clifton Powell, actresses, Lynn Whitfield and Debbi Morgan; and R&B singer, Angela Winbush.

Keith reminds us of a time when fans actually expected to get quality music from artists who competed with each other by NOT sounding like the next artist, but by sounding as different from one another as they possibly could…much unlike today, where many mainstream artists are carbon copies of each other.

And we can’t forget to mention the artists who are over-using using auto-tune resulting in them sounding more like Alvin and the Chipmunks cartoon characters, just saying 🤷🏾‍♂️. But fortunately, we still have artists like Keith Washington, reminding us that once upon a time in the early ’90s and before, singers had to actually pull from everything within them to push those notes out with no technological crutches to assist them help…just raw talent.  Gotta love the Old School memories.