The past few days have been a roller coaster ride of emotions and allegations for rapper, Nelly, and his accuser. Ever since Oct. 14th, the ‘roller coaster’ was at an all time high for Nelly, after the woman oddly enough no longer wished to press charges. As of today, it’s at an all time low for the “Country Grammar” rapper.

In case you’ve been sleep for the past week or so, Nelly was making headlines after he was accused of rape by an unidentified woman who claimed he raped her on his tour bus. She said the alleged crime happened while his bus was parked in a Walmart lot in Washington, where he was performing. She told law enforcement that the alleged rape went down at 3:48 a.m. Saturday, Oct. 7th.

Nelly was arrested and soon released a few hours later, without being charged. He and his attorney also immediately spoke out to denounce the woman’s claims as “lies.” His lawyer said “Nelly is the victim of a completely fabricated allegation” and that they were gonna “pursue all all legal avenues” to address the “damage” the accuser’s “lies” caused. Nelly also instantly hit u social media to address the situation: 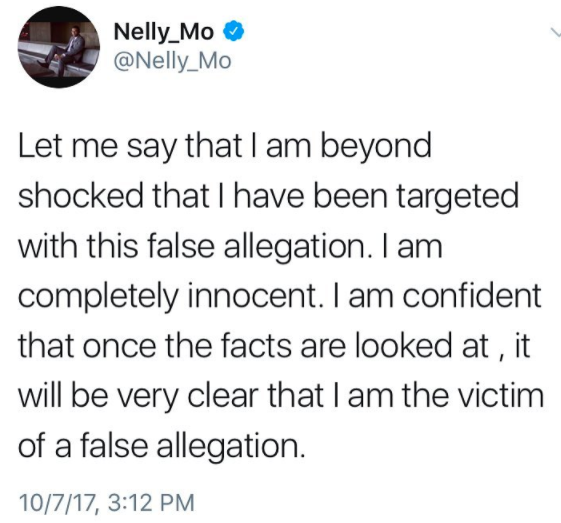 Then came the accuser’s sudden change of heart…

Recap Of Why Accuser Has Suddenly Dropped Charges 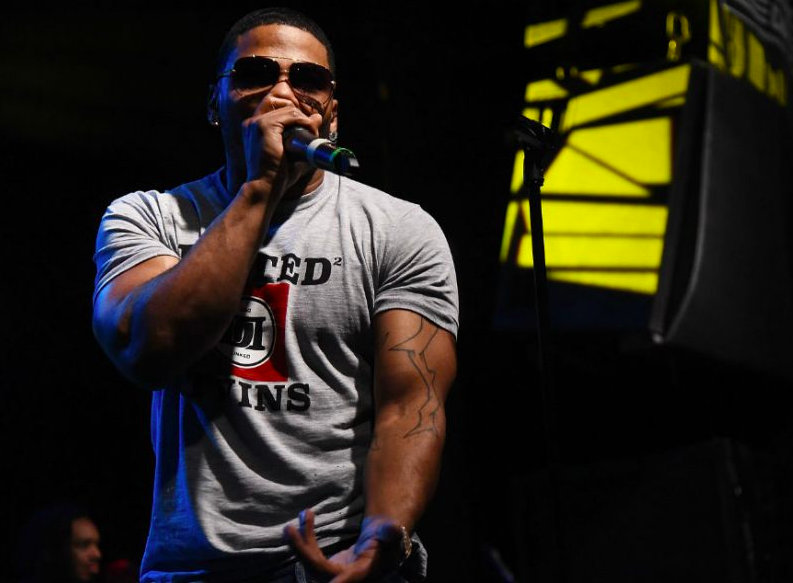 As we previously reported, less than one week later, the accuser and her lawyer released a lengthy letter on Friday (10-14-17), trying to explain why she suddenly dropped all charges against Nelly:

Via TMZ: The woman who accused Nelly of rape is refusing to testify, and wants the whole matter dropped … TMZ has learned. The woman’s attorney says her client has told the Auburn PD in Washington State, and the King County D.A. to “put a halt to the criminal investigation of [Nelly]. She will not testify further in a criminal proceeding against him.” Her attorney says the young woman feels the system has failed her and she can’t stand up to a celebrity. “Who will believe her? People are saying horrible things already. She cannot handle this. She is about to break.”


As of Monday afternoon, word began circulating that although the woman decided she does not wish to proceed with her claims, the Washington police are going after Nelly anyway. Not because they have some type of ‘proof’ against him at this time, but they probably wanna make sure they aren’t overlooking any potential ‘evidence’ that a rape actually occurred. If I had to take a wild guess, I’d also assume that the fact that Nelly’s a high profiled celeb,’ may have a lil’ somethin’ to do with it too, but I could be wrong, so don’t quote me on that. See what’s being reported below:

Law enforcement sources in Washington State tell us police in Auburn are undeterred by the accuser’s noncooperation with the investigation. We’re told Auburn PD is still gathering evidence and plans to present the case to the prosecutor’s office. … While [the accuser’s] noncooperation makes the case more challenging, it’s not impossible to prosecute. We’re told Auburn cops want to present the case to prosecutors soon — within the next week.

Nelly’s attorney, Scott Rosenblum, tells TMZ he’s confident the case will be closed based on the evidence. He adds, “I would expect the police to do their due diligence.” Ultimately, it will be up to prosecutors to decide if Nelly’s charged.


Meanwhile back at the ranch: Nelly has gotten back on his grind, with his touring and club dates. On Sunday night, he and T.I. performed for a packed house at Rockwell Nightclub in South, Florida. T.I. made it loud and clear where he stood on the drama surrounding Nelly and so did their fans. Check it out here: