Legendary DJ, DJ Scratch, lit up the internet on Wednesday (3/28/18), when he was the first one to reveal that Bad Boy rapper, Craig Mack’s funeral/memorial had taken place with very little fanfare. Scratch also let out many secret details that surprised not only him, but millions of fans.

Craig Mack, sadly passed away on March 12 (2018), at the age of just 47, reportedly from congestive heart failure. Much like his death and the details of the last years of life, Mack’s memorial/funeral services were just as surprising and mysterious, according to his friend, DJ Scratch.

Mack was buried March 28th, on the property of Overcomer Ministry located in Walterboro, South Carolina, which is where Mack reportedly lived and dedicated his life to Christianity. DJ Scratch was in attendance at the memorial service and posted his experience on Instagram, with a shocking caption that pointed fingers at Sean “Diddy” Combs and many others in the music game: 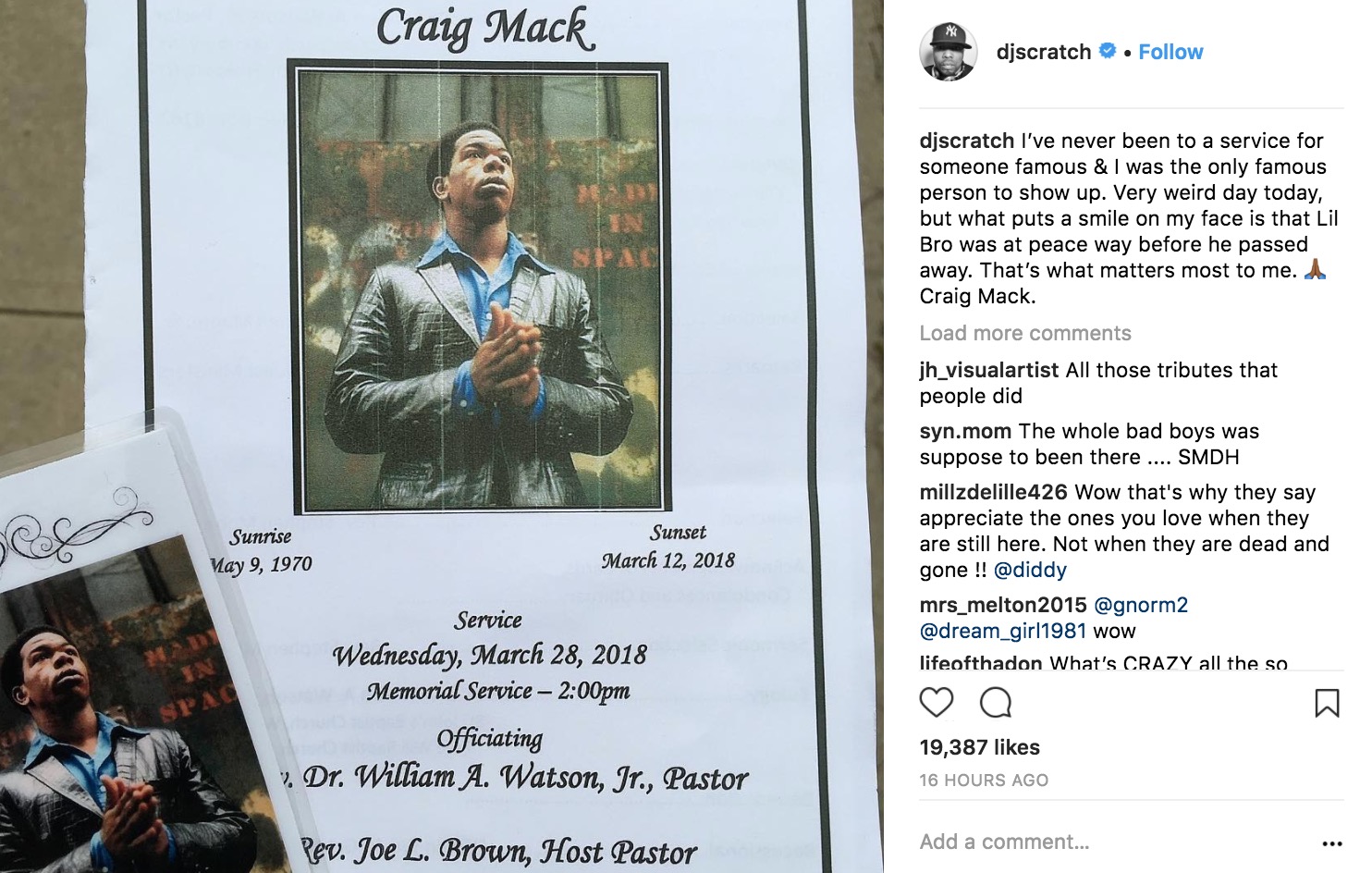 “I’ve never been to a service for someone famous & I was the only famous person to show up. Very weird day today, but what puts a smile on my face is that Lil Bro was at peace way before he passed away. That’s what matters most to me,” DJ Scratch wrote.

Scratch then hit up his Instagram with another shout out to Mack’s childhood friend, for being there for the brotha:

“I want to salute my Bro Alvin Toney. Alvin is the man that put together Craig Mack’s NY Memorial service.” Then he proceeded to tell a brief history on how Alvn was the one who took Craig Mack to meet meet Diddy and “got him a deal on Bad Boy,” where Mack released the label’s first platinum selling hit ever. 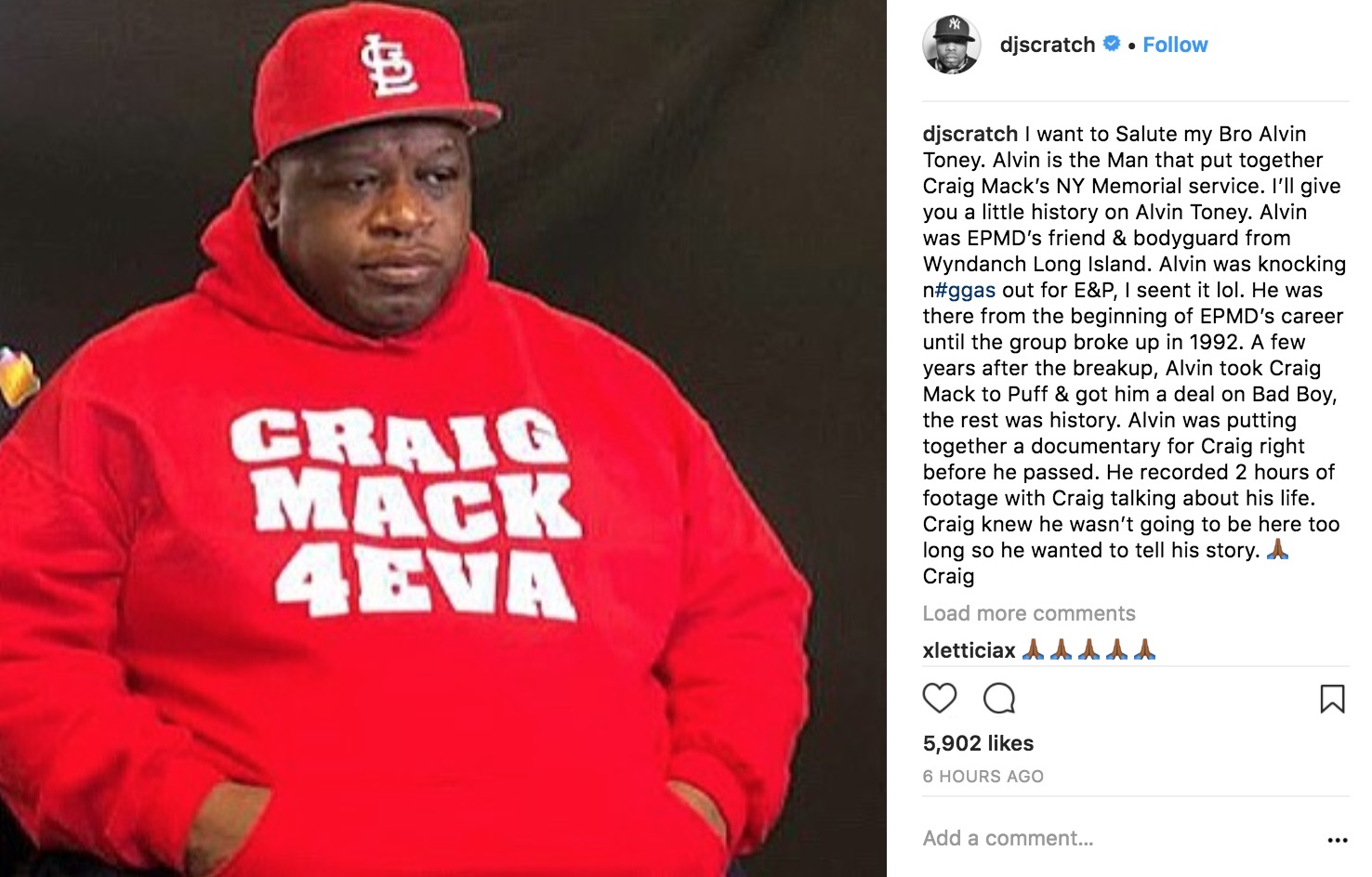 Scratch’s reveal, that he was “the only” famous person in attendance, displayed his heartbreak over the fact that most of Mack’s music industry friends weren’t their to pay homage to the late rap legend. Of course it didn’t take long for that news to spread and one of the main celebrities fans slammed, was the cat who first released Craig Mack’s music in the 90’s, Diddy. BUT THEN THIS HAPPENED…

Diddy Was BANNED From Mack’s Funeral

A few hours after posting his frustration about Diddy and others not attending Mack’s funeral, DJ Scratch discovered even more shocking news about why Diddy was not there. Turns out it was due to two reasons- (1) Diddy didn’t even know the services had already taken place; and (2) Diddy was banned from the services by the religious congregation that Mack belonged to. Scratch revealed that Diddy also offered to pay for Mack’s funeral, but there’s a backstory to that as well. After learning all this, Scratch went back to Instagram to clear things up to his fans:

“When I left Craig’s memorial service I called @Diddy to thank him for giving Craig the platform for the world to know Craig Mack’s music,” Scratch wrote. “I told him I just left the service, he said ‘They buried Craig already, what service are you talking about?!?’ He didn’t know about the memorial service. @diddy offered to pay for Craig Mack’s funeral, but the religious community Craig was in declined. None of his Friends or colleagues were allowed to attend his funeral. Diddy respected their wishes. Craig was immediately buried on the property where he lived. Yesterday’s service was a memorial for Craig’s friends in NY & for fans to attend thrown by Craig’s childhood friend Alvin Toney.”

“If you look at my post the day Craig passed I praised @Diddy for signing Craig because I saw what he went through. I said no famous people showed up to Craig’s memorial service was weird because I saw so much love online, but I didn’t see a line outside. If @Diddy didn’t say yes, there be no Flava in our ears. Salute Diddy!!!”

Not really sure why Diddy- the man responsible for giving Craig Mack his first big break- was banned from honoring him at the services, but pretty sure he’s at least thankful that Scratch cleared this up publicly. Rest on Craig Mack.