Our girl, Erykah Badu, is back at it! This time she has many of her fans and haters saying, ‘What in the hairy HELL?!!’ Why, you ask? Well, it’s because the “Tyrone” game spitta has managed to turn heads yet again, fresh off of the heels of her other recent head turner just days ago.

It seems Erykah either had a tad bit too much time on her hands early Thursday, or she was simply just making a statement when she took to Instagram to share a close up shot of her hairy armpit. Depending on how you look at it- you’re gonna think her pic is either beautiful, or repulsive- but either way, you’ll probably have an opinion, which is what Erykah is known for sparking.

In her hairy pits post, Ms. Badu held up her arm proudly and captioned the photo with a message that not only focused on her densely hairy pits, but also her other hairy area, if you catch my drift. That’s right, Erykah ended her caption with the hashtag, #CarpetMatchesTheDrapes, to elude that she is in fact hairy from head to toe. Or as John Witherspoon so eloquently stated in the movie Boomerang, Erykah is hairy “from the rooter to the tooter.” Don’t shoot the messenger though family, those are Erykah’s revelations, not ILOSM’s, just sayin.’ Check out her caption and hairy pic below: 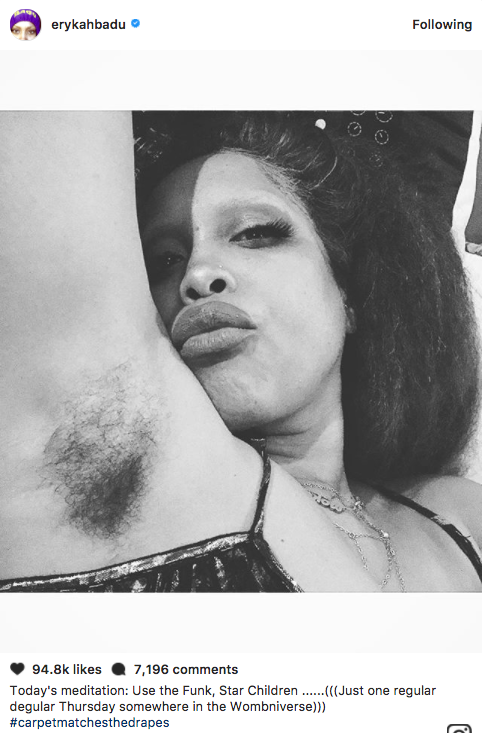 Of course her fans had a whole lot to say about her hairy reveal. The reactions were priceless. They were a blend of women who felt empowerment and a unspoken hairy-licious sisterhood with Erykah after seeing her hairy pits. Then there were many women and men who thought Erykah’s reveal looked like she had ‘Cousin It’ in a headlock and needed to get rid of him ASAP.

The whole time, I just sat back with my imaginary popcorn and surfed the comments for a brief moment of entertainment. Check out some of the reactions below… 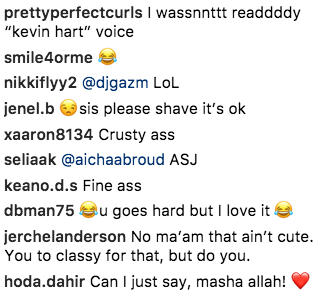 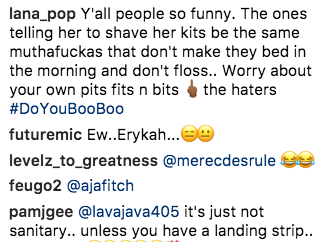 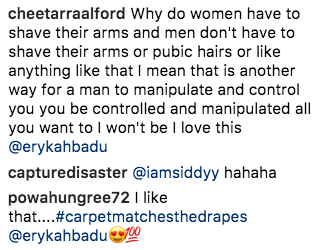 Ms. Badu has had quite a few shock moments throughout her career. In fact, one of my personal favorites was her controversial naked assassination re-enactment in her “Window Seat” video. Remember that? That’s when she rocked a stocking cap and stripped butt naked, while walking down the same Dallas, TX route where the late President John F. Kennedy was sadly assassinated. I thought it was a powerful moment of sexuality, beauty, bravery, rawness, and shock.

But in case, you missed her very recent hair shock moment, which we covered the other day, here’s what happened: Badu sent Twitter in a tizzy, when she posted a photo of her new Coolio (as in the rapper) inspired hairdo…

Proof, yet again, that ever since Erykah Badu stepped onto the scene in 1996 with “On and On,” she’s been sending us shock waves and we ain’t mad at her at all for that one. Do your thang Badu…hairy armpits, drapes, curtains, carpet and all!