I LOVE OLD SCHOOL MUSIC spoke exclusively to actress, Chrystale Wilson, best known for her role as “Ronnie” on the hood classic film, The Player’s Club. Chrystale spoke about her work on the film and the truth behind the fight scene with Lisa Raye’s character, “Diamond.” Little did we know, but that fight scene was very intense and so was the tension between the two of them while filming. Check out what Chrystale said about being casted for the role and the tension between her and Lisa Raye.

Chrystale Wilson: “We were both young and we were both stallions out the gate. And what’s funny is that before we both knew for sure that we got that part, she and I totally got along. I just really would go to bat for her, and thought that we would be great friends. When we both got casted and got the part, things were a little different because of her being the star, it was just challenges. A lot of things happened that didn’t need to happen.” 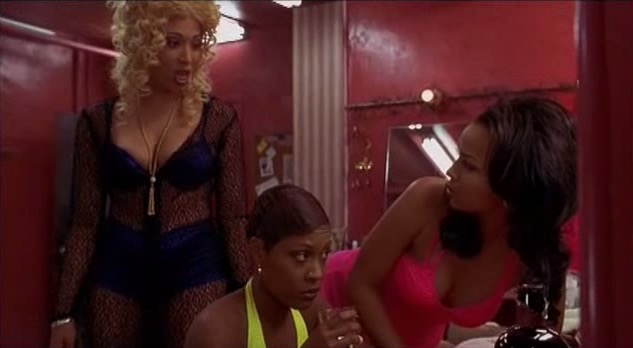 Do you think Lisa Raye was intimidated by you back then?

CW: “You know looking back I can probably say that, but being young I couldn’t really see that. I was more concerned about doing a great job, and I’ve just the type of person that when people give me an opportunity, the last thing I want to do is let them down. I’ll work myself to pure exhaustion before someone can say, well damn I’m disappointed. So I couldn’t even get caught up in whatever she was going thru. I was just focused on killing it for the fact that Ice Cube took a chance on me, went to bat for me. I admired Ice Cube so much, that I didn’t get caught up with it.”

“But there was little stuff, like during the fight scene, she (Lisa Raye) didn’t know that when I came and put my finger in her face, she had no idea that that’s how it would go. Me and Ice Cube had a conversation, and he said I really need you to lead this scene. He said, I know how it’s written, but you tell me what needs to happen to make it really pop. I said well, I don’t want to rehearse it with her. If it’s rehearsed it won’t come of right, so can we just go into the scene? ‘Cause I’m just really gonna invade her space. I’m gonna invade her space to the point where she is not gonna know what’s happening, and she is just going to have to react naturally. Cube was like, ‘Yeah that’s dope.'”

“I walked up on her, I put my finger in her face and I was like ‘I run this motherf!*ka’. She wasn’t expecting it and that was a true reaction when she backed up me like, are you f*!king serious? She didn’t know what was coming at her.”

Chrystale on the realness of Lisa Raye’s character putting her finger in her face:

“If you further look in the movie, and I’m in the dressing room before we had the big fight. She comes in and puts her finger back in my face and by that time we were at odds. And that was real. Everything that I did I was doing it to make it best for the character, and I think she was taking it personally. But I’m like hey it’s not personal. When we clock out we’re buddies. We can chase each other around this bi#*h all day, but when we clock out we cool. But she never got that concept.”

“One time in particular, we were around the jacuzzi, and she (Lisa Raye) was like, yeah just grab me don’t worry about it, just snatch me. So I did,  I snatched her. And then she turned around and told Ice Cube that I’m snatching her all hard. And I’m like, ‘What happened?'”

“So we had glasses of fake champagne on the side of the jacuzzi, and she acted like she was playing and picked up one of the glasses of champagne and threw it at me. Like threw the champagne at me. And I”m like, ‘Are you for real?'”

“And I came out of the jacuzzi to go over to her, and she (Lisa Raye) was like “Ey, Ey…no horsing around here, cut that out.” And I remember catching myself, cause it could have gotten ugly. So I had to catch myself.”

Fast forward to today and it all seems to be water under the bridge. Chrystale even said that she thinks Lisa Raye is a “beautiful woman, she’s a hustler. She knows how to take a situation and really ride it and get every single opportunity out of it. And that is a quality that I admire.”