Bobby Brown done stirred up the internet, after fans had their eyes glued to the TV screens Tuesday night (Sept. 4) for part 1 of his 3-part biopic miniseries, “Bobby Brown Story.”

Although we’ve already heard about certain incidents that were covered in the biopic, the reason fans are going off on social media, is because many of us NEVER knew the intricate details of said incidents. THAT is what makes Bobby’s BET biopic EPIC.

As expected though, fans have reacted both positively and negatively toward Bobby’s countless revelations about his drug-filled-adulterous-baby-making past thus far. They’re now throwing profuse shade at Bobby’s wife, Alicia Etheredge-Brown, as well. Get all the scoop below…

For several years now, Bobby has maintained that despite public belief, Whitney was the one who introduced him to hard drugs. Prior to dating her, Bobby says he only smoked weed and drank alcohol. His claim was further backed up when Whitney’s brother, Michael, confessed to Oprah and his mother, Cissy, that HE was the one who introduced Whitney to drugs, long before she’d met Bobby.

That did not stop fans from taking to Twitter to debate which one introduced the other to drugs- Bobby or Whitney. Why? Because Bobby’s biopic has now offered a third version of when he actually discovered Whitney’s drug addiction. There were two different versions in The New Edition and Whitney biopics. Anywho, Bobby’s version showed him discovering Whitney’s drug addiction when he caught her snorting cocaine on their wedding day. In the film, Whitney nonchalantly looked at Bobby and said, “Now you know.”

Fans reacted with skepticism and confusion:

So Bobby gone act like he was the innocent one and Whitney was just out here surprising him with coke and he didn’t partake #BobbyBrownBET pic.twitter.com/viV8suTg3V

Bobby saw Whitney snorting that cocaine and fell right back in love. I need that crackhead type of love #BobbyBrownBET pic.twitter.com/QbaM85rhOy

Then there was the shocker about Bobby’s wife and mother of three of his children – Alicia Etheredge-Brown. The biopic showed Alicia giving Bobby a pep talk on his wedding day and convincing him to go forward with it. Yep, she was in the picture THAT long. In fact, Bobby previously revealed that he and Alicia were “friends,” who were just “kickin’ it” before he met Whitney:

Via People– “We met many years ago, many years ago,” Bobby told Access Hollywood in 2012. “I believe I was about 18, and we were at a dance place, where people just go and work out their new moves … I met her there, and we became friends, we all hung out. … Then I ended up getting married, and after me getting divorced, for some strange reason, I saw her again and sparks flew.”

Needless to say, fans are not feelin’ the way Bobby went into detail about everything else, EXCEPT his current wife, whom they believe was far more than a friend to Bobby throughout his 14 year marriage to Whitney: 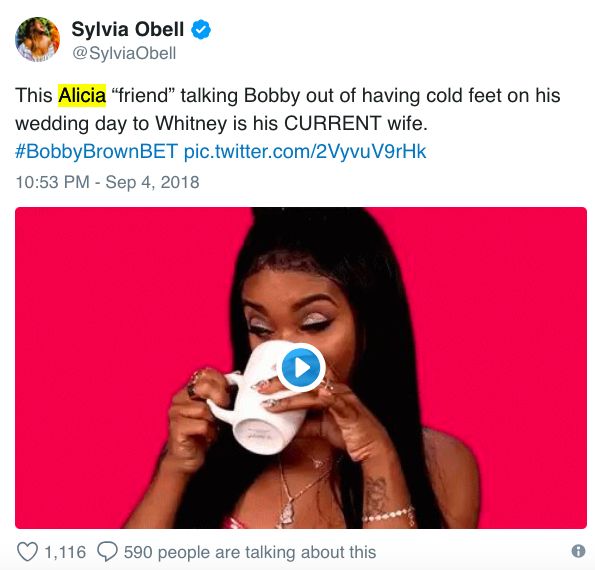 Hold up…. wait a minute…. so that hussy Alicia, Teddy Riley’s girlfriend who kept giving Bobby the come hither eyes, the one who consoled Bobby before the wedding to Whitney is his current wife?!?!? #BobbyBrownBET pic.twitter.com/QY66UFEBtu

And of course fans wouldn’t have been satisfied if Bobby’s biopic didn’t detail exactly what went down when he kicked his then boo-thang, Janet Jackson, outta the hotel room butt naked! As it played out onscreen, she broke his heart when she told reportedly him she couldn’t continue to be with him because her Pops didn’t want her with a Black man.

In his 2016 memoir, Every Little Step: My Story, Bobby had already revealed that tidbit of info, but apparently the Twitter-verse didn’t read Bobby’s book. Many of their reactions were that of utter shock by the Janet Jackson scene in his biopic:

Janet Jackson On The Phone With Her Lawyer Like . . . #BobbyBrownBET pic.twitter.com/N8RpfOaPOf

Janet Jackson was married for a whole 10 years before she let y’all know she was getting divorced. She can keep a secret #BobbyBrownBET

The film also revealed that Bobby got Whitney and his other child’s mother, Kim Ward, pregnant at the same time. This was reportedly while Whitney was filming The Bodyguard, but during filming, she sadly had a miscarriage. They later had a successful pregnancy and conceived Bobby Kristina.

In addition to that, the film showed that on the night Bobby impregnated Kim, he flew home to propose to Whitney the following day…not realizing yet that Kim was pregnant, with their now 28 year old daughter, LaPrincia Brown. And now, the fan reactions:

He knocked up his babymama (but didn't know it yet) then came back to ATL and proposed to Whitney. Lordt. #BobbyBrownBET pic.twitter.com/2AtH5P1KRd

Bobby a wild boy. Knocked up his baby momma before his wedding to Whitney and got a pep talk from his current wife before he walked down the aisle? #BobbyBrownBET pic.twitter.com/C2nuKc8bfI