We all know George Foreman as the heavyweight boxing icon who released his infamous George Foreman Grill some years ago. We also know that he made some money from the grill, which you can get for as cheap as approximately 30 bucks, but what many of us may not know is that Foreman didn’t just make some money for endorsing the product…he made a killing off of it…and not just the average celebrity endorsement check. Why? Because it wasn’t an endorsement at all. In an interview with In Depth, Foreman explained how he went from being the ‘It celeb’ for endorsement deals, to being tossed to the side after a period of time, by major brands. Left without many options, his friend came up with an idea:

Foreman: “I’d gotten really popular on Madison Avenue. We’d done Doritos, McDonald’s, Meineke…every commercial there was. People pay you a lot of money. People pay you a lot of money to do a commercial, but then after a period of time, they move on to someone else. And finally a friend of mine [Henry Holmes] said, ‘George you’re making all of these other companies money, why don’t you get your own product.’ I said ‘Sure, how much you gon’ pay me?’ He said ‘No, no, no, no, no, we’re not gon’ pay you. Get your own product.'”

George explained that when they came across a random prototype of what would eventually become the Forman Grill, no one else in the industry wanted anything to do with it, assuming it was a bogus product. George agreed…in the beginning and almost passed up the opportunity.

Here’s How Much MONEY Foreman Earned From The Foreman Grill 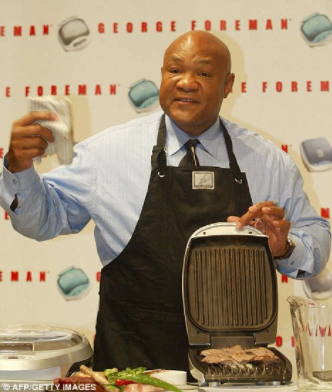 Foreman admitted that although he thought the grill worked wonderfully, his only high hopes for it were to get them into his training camps, thinking that it would be a huge success there.

Foreman also revealed that at one point the checks were coming in at $5MILLION monthly.

He eventually sold the Foreman Grill brand for $140 million, in addition to the many millions he’d already earned from his product.

If It Wasn’t For His Wife, There Would Be No Foreman Grill

Like the saying goes: ‘Beside every great man, is a great woman.’ That rang true for Foreman, because although he’d taken a prototype of the grill home to ponder the idea, he admitted that he didn’t even want to use the thing because he didn’t think it would work, let alone sell. However, his lovely wife, Mary, soon convinced him that the grill was the TRUTH:

Foreman: “I didn’t want to use it, but my wife insisted. She said ‘It works George.’ And the grease really rolled of and it’s [the meat] still tender and I said ‘Boy! Let’s do it!!'”

Foreman then tested 16 more of the grills on his family and they loved it.  That’s when Foreman and his business partner, Holmes, put the grill on the market and the money started rolling in.

Wow! Who knew?!! I betcha George Foreman will forever be grateful to his wife, Mary, for pushing him to try the grill, because clearly, his first intuition about it was WRONG! Props to Foreman for keeping an open mind to the idea.