Forget What You Heard…This Man Is The Real Reason We All Have Mobile Phones, Here’s Why

In honor of Black History Month, we wanted to shed light on a man who is responsible for helping make all of our lives better today, but gets very little public recognition. Unbeknownst to most of the world, the reason we have mobile phones and wireless device is not because of Bill Gates, Steve Jobs, nor any other executives at any well known communication brands that are making a killing off of the wireless devices. It is because of an African American named Jesse Eugene Russell and his innovations.

During his tenure as an engineer at AT&T-Bell Laboratories in 1988, Russell created the concept of wireless communication, by developing the world’s first digital cellular base station. That paved the way for never before seen digital services for cellular mobile users, which Russell currently holds the patent to.

Via Pressvue: Prior to Jesse Eugene Russell’s invention, a mobile device was only possible to be used in a vehicle or in a car, because the power required for that mobile to transmit a signal to a cell tower would have been impossible for a small handset device to handle. So, Mr. Russell’s invention made it possible for the proliferation of handset devices and for its affordability. So the technological dynamic between the handset device and the cell towers was re-engineered (a new concept was invented) by Mr. Russell and thus, the possibility for signal transmission between our current handset devices and the cell phone towers.

Jesse Russell: “The Father of 2G Communications” from iAM Solutions, LLC on Vimeo.

Russell described the day his AT&T-Bell Laboratories supervisor came to him with the task that none of the other employees wanted and asked him to damn near come up with a miracle. That miracle was to figure out how to do something with the cellular phone concept that AT&T, nor any of the other major telecommunications could figure out. Russell accepted the challenge and got to work:

Jesse Russell: I’ll never forget the first day on the job, I called a meeting with all of the managers…they were all white, I was the only black hiring. And I was saying, ‘Well, what’s the problem?’ Because they [AT&T] were losing so much money, it was pathetic… They said, “The problem is that we can only maje money when people are in their cars, the phone rings then they answer…but most of the time, people are in their cars.”

Then Russell dropped a bombshell of an invention on them in response:

“I said.’Well that that seems like an easy problem to solve, right?’ Why don’t we just take the phones out of the car and put them on put them on the people.”

The wireless mobile device concept was unheard of at that time and it was brilliant. But as we could imagine, turning that concept into a reality was far more complex than it sounded. Thanks to Russell’s innovative creation and dedication, the world has moved forward as a result. 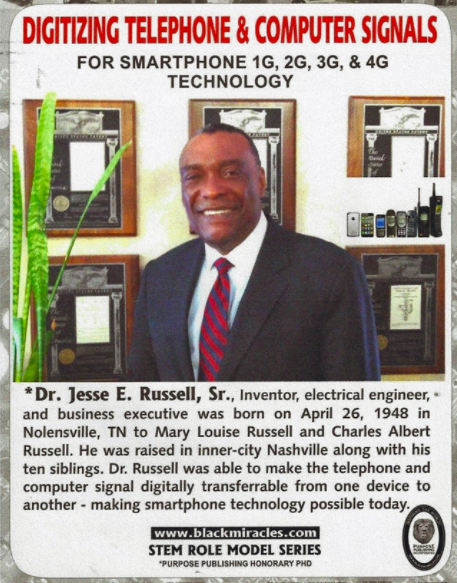