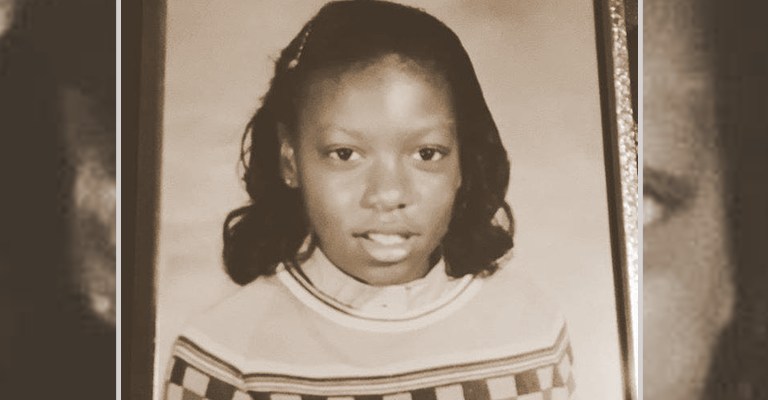 This little cutie pie was in the 4th grade in this this throwback photo, but she is now a 49 year old woman. She has been hailed as a very strong woman and even an activist, whom many follow.

Throughout her music career, she’s caught a lot of flack about her views on LGBT relations and the standards that people of the LGBT community should be held to. But through it all, she has maintained her stance and continued to remain an open and honest representation of herself.

Her facial features haven’t changed much, and if you look closely at her childhood photo (above), you may now be able to see that the kid is the one and only Meshell Ndegeocello!

Remember her? For those who aren’t very familiar with Ndegeocello, she’s a singer and an incredible musician (bass player) who knows how to perfectly blend her religious rebelliousness/confusion, her political activism, and her diverse sexuality into one big melting pot of soulful gumbo.

She first hit us with her 90’s classics, “Dreadlocs,” and “If That’s Your Boyfriend (He Wasn’t Last Night),” and we can’t forget about her timeless song, “Fool Of Me,” from the Love & Basketball soundtrack. Ndegeocello also caught the attention of many with her songs, “Who Is He and What Is He To You,” a song about her catching her female lover messing around with a dude; and “Leviticus: Faggot,” her religiously defiant joint.

Here’s How Ndegeocello Pissed Off The LGBT Community

Meshell Ndegeocello was one of the very few entertainers of the 90’s era who was openly a lesbian, or so we thought…then we found out that she wasn’t actually a lesbian, but that she was in fact, bisexual. That is where the extreme amount of backlash from the LGBT community began for her.

You see, initially Meshell was presumed, by most of her fans, to be a lesbian R&B artist. Although her first single was about running her fingers through a man’s dreadlocks, somehow, the lesbian perception was still there. So when her first album came out with songs that were primarily about loving and making love to a woman, but had a few heterosexual love songs sprinkled in between, many within the LGBT community called her a “sellout to a straight America,” according to Rolling Stone.

How Meshell Ndegeocello Responded To The Backlash

Meshell’s response was “I could care less.” She was always focused on staying true to herself and according to her friend and collaborator, Wendy Melvoin (formerly the guitarist for Prince’s Revolution band), Meshell Ndegeocello is a very bisexual woman, who never hides that reality from the world.

Ndegeocello: “I think early on when the music business was a little different, and they had to create some sort of persona to sell, I think I got sold as this angry, black, gay person. I think that’s a huge misconception. Other than that, I don’t really think about it. That’s why I had to ask you,” says Meshell Ndegeocello. [Out Magazine]

“I’ve come up with a new term: I am sexually functional with both genders. I just choose to be with this particular one. Who knows what the future holds? It’s just such a weird concept to me that it’s so important to how you judge my music or my character or anything about me. I’m never assuming what heterosexual people are doing.”

And there you have it. Meshell Ndegeocello is a woman who never bites her tongue – not in her music, nor in her everyday life and that is why we love her.