Not again? So, it appears that Kandi Burruss-Tucker is entangled in yet another lesbian rumor. While it’s not Porsha accusing her this time, it appears that Kim Zolciak-Biermann alleges that Kandi offered to lick her box as well. Now, the ladies are having a Twitter war as Kandi responded to Kim’s claims.

Lawd!! Former friends, Kim Zolciak-Biermann and Kandi Burruss are going at it on Twitter after Kim accused Kandi of offering to “lick her box”. Shereé Whitfield, also known as the bone collector,  sat down for dinner with Kim Zolciak-Biermann, the tea hit the fan as Kim started spilling some spicy allegations. While the ladies are having dinner, Kim swears on her children that Kandi allegedly offered to lick her box as well. Shereé is completely stunned as this is not the first time that Kandi has been accused of being a closet lesbian. If you can recall, Porsha Williams made those same accusations last season.

Fed up with the lies, the lies, Kandi took to Twitter to address Kim’s claims by boldly stating that she NEVER wanted to have any type of sexual relations with Kim. Additionally, Kandi told Kim that she should stop using her children to support her lies. Then, she dropped the mic by implying that Kim was making these lies up to be a permanent housewife. However, Kandi quickly reminded her that she was just a “friend of the show”. 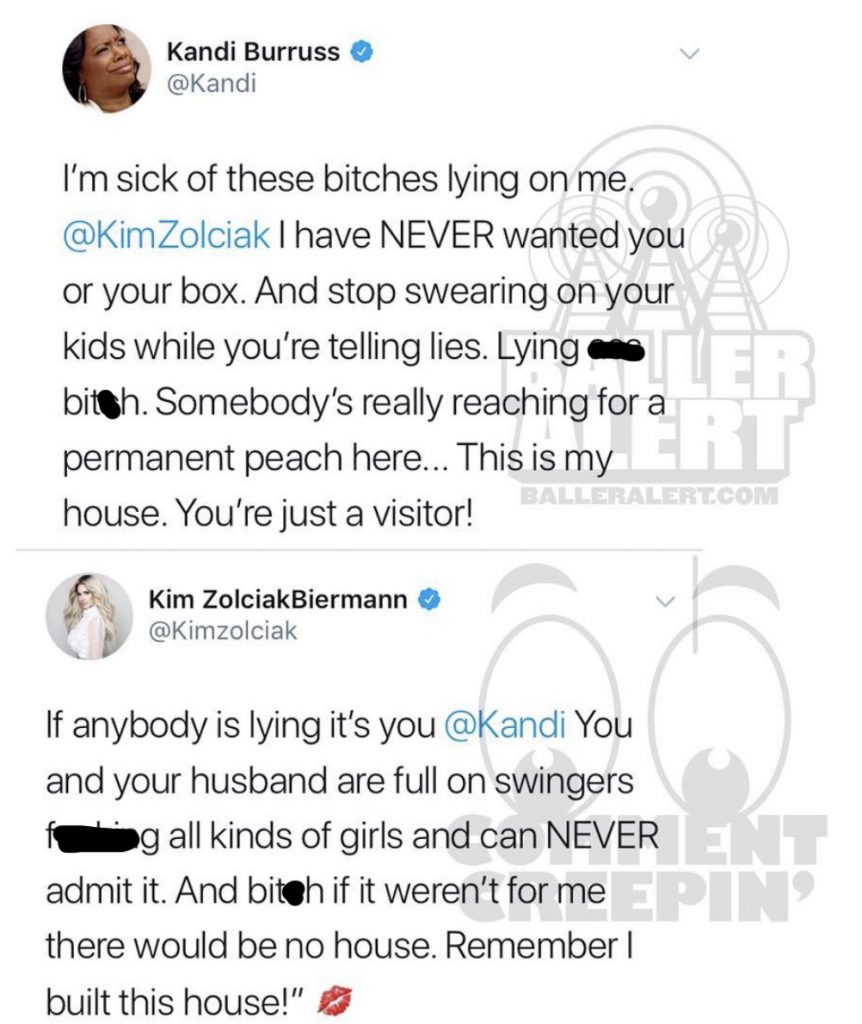 Kim then clapped back by stating that Kandi and Todd are allegedly swingers. The former housewife of Atlanta implied that Kandi and Todd have sex with other women on a regular basis yet they deny it. In case Kandi forgot, Kim reminded her that she was one of the original housewives of Atlanta. Kim claims that there would be no show if it wasn’t for her.

Kim And Kandi Used To Be Friends:

Kim and Kandi were once great friends. Remember when Kim thought she could sing? Grammy award winner, Kandi Burruss helped Kim have a measure of success in the music world as she wrote, Don’t Be Tardy For The Party. While the song was originally a country song, Kandi co-wrote a remix of the song with Rodney Richard and they just kept the chorus from the original song. At that time, Kandi tried several times to recoup monies owed to her for both royalties and production writing fees. Kim made tons of excuses and reportedly didn’t pay Kandi all of her money. Additionally, Kim put the song on “I-Tunes” without Kandi’s consent. The ladies even went to court over the song but Kandi lost which wasn’t surprising because she had Phaedra Parks representing her.

So, while the ladies are in their perspective corners, the internet reacted to the rumors that Kandi is a lesbian.

Check It Out Below:

kandi we don't believe you unfortunately

Speak for yourself. Kandi is the only one on the show who hasn't lied. Never wavered whenever confronted about anything and has been this way consistently. Roll tapes and you'll see. It's like I tell people, you may not like what I said or the delivery but it will be the truth. pic.twitter.com/xQ3DtOC6gP

Yes Kandi!!!! And Kim still needs to pay those #Tardy cheques she owes you from season three.