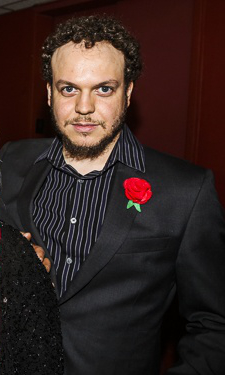 His Dad is an iconic figure in entertainment, who became really popular in film in the 70’s era. If you’re a fan of old school movies, you have probably seen his Dad in at least one of them.

And if you guessed James Earl Jones- the Old School icon with an even more iconic voice- then you were correct!

His son’s name is Flynn Earl Jones and doesn’t he look exactly like his Pops? Flynn’s mother is actress, Cecilia Hart. She and James Earl Jones have been married since 1982.

One thing I’m wondering, is how James Earl Jones’ beloved mother would have felt about Jones’ son and his wife, because Jones publicly revealed, in a 2011 interview with BBC News, that his mother was very “racist.” Jones loved his mother dearly, but this is what he explained about her views on race:

“She [his mother] was the most racist person, bigoted person I’ve ever known. She trained us that way. She would consider it defensive racism, but it’s still racism, it’s still the same poison.”

“I didn’t know him and he didn’t raise me, but in high school I would see his picture in national magazines,” Jones remembers. Eventually, after Jones’ failed attempts at being a soldier in the military and attending a university to study medicine…only to realize he wasn’t good at it, he decided to follow in his father’s footsteps and become an actor.

After Jones’ wife, Cecilia, became pregnant with their son, Flynn, while they were both performing together in a Shakesphere stage play, Jones was determined to be the best father he could be. Jones said:

“Flynn’s mother came onstage with him in her belly. I was Othello, she was Desdemona.”

Jones and his son are extremely close and in fact, they work together everyday because Flynn Earl Jones is his Dad’s personal assistant. So Flynn is right there by his Pops’ side looking out for him at the tender age of 87 years young and although work only gets tougher for James, he had this to say about it:

“I do like my rest, it was hard to get up this morning” – but he can’t ever see himself stopping. “I have no other employment. I can’t afford the amount of land you need to be a farmer and that’s the only other thing I know. The military I liked when I was in it but I’m too old. There’s nothing I would retire for, so I won’t retire.” He grins. ‘‘I’ll just keep going until I fall over.”

We’re looking forward to seeing Jones continue to do his thing in acting for many years to come.

Jones developed a severe stutter as a child, which left him extremely self-conscious and shy around other children. He refers to his voice as “salvaged”:

“If you’re in the army and you need a tank,” he says,”you fix one that’s broken and you go into battle – it’s a salvaged tank. I have a salvaged voice. And every role is an attempt to learn how to use it again.”

He refused to speak in school, until a teacher helped him out of his silence during his high school years. Jones later told the Hollywood Reporter:

“I had a great English teacher who believed in language and he looked at a poem I wrote and said, ‘It’s too good for you to have written, so to prove you wrote it, please stand up in front of the class and recite it from memory.’ And I did it without stuttering.”

James Earl Jones is an incredible actor, who has accomplished many things throughout his career. He’s the infamous voice of ‘Darth Vader’ in “Star Wars,” the voice of ‘Mufasa’ in Disney’s animation, “Lion King,” he’s won many awards- Academy, Tony, Emmy, and Gloden Globe Awards- but my absolute favorite character from Mr. Jones’ resume’ will always be his role as the charismatic ‘Rupert,’ in the Old School classic, “Claudine.” Check out the video clip above and reminisce with us to that memorable scene from Claudine.