The 20 year old son of Real Housewives of Atlanta’s Sheree Whitfield, made his music video debut a few days ago. He played the love interest of the one and only Fantasia Barrino, 32, in her video for her new single, “When I Met You” and I must admit that at first I was confused. Why? You ask, well it’s because I know that our girl, ‘Tasia, is old enough to be his auntie, or school teacher, but yet I was watching him put moves on her in the vid.’ Not that there’s anything wrong with that, but it’s just a lil’ odd, being that in many states Kairo isn’t old enough to legally get into a club, or buy a drink at a bar, that’s all. But after I read Fantasia’s Instagram description of what the video actually represented, I then understood:

@tasiasword: Part 2… We did it again @mrdblanks 🙌🏾 The #WhenIMetYouVideo is #TheDefinitionOf that ’90s throwback vibe. A true era of music! I play the teenage version of myself (T-Boz cut and hoop earrings y’all) blinded by a false idea of love. 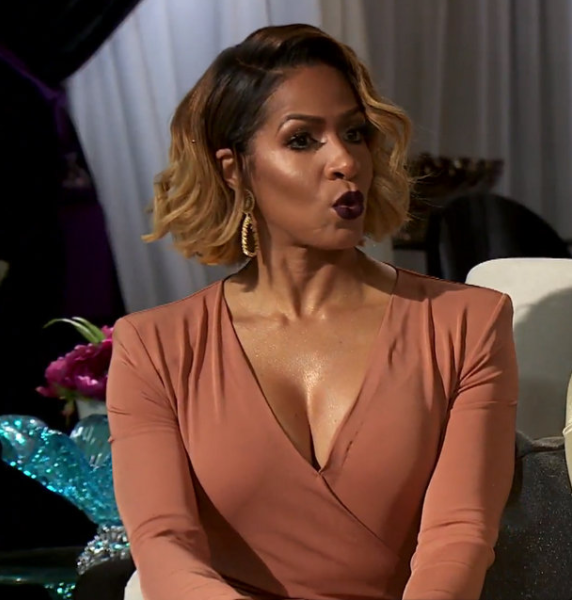 Also in the video is Fantasia’s husband, Kendall, whom she married in 2015 and her BEAUTIFUL  15 year old daughter, Zion Barrino, who is lip synching to her Mom’s lyrics as she plays the young ‘Tasia in the video. Check it out below:

After working with Fantasia, Kairo expressed his gratitude to her and director/photographer, Derek Blanks:

@shereewhitfield: Thank u @TasiasWord and @dblanks for giving my son @Kairo.Whitfield the opportunity to b a part of this!!! I already know with u two involved it will b phenomenal. #Momager

SHEREE’S MESSAGE: ‘COUGARS STAY AWAY FROM MY SON’ Needless to say, the ladies have been going crazy over Kairo, who clearly  isn’t the little dude we saw on RHOA a few years ago. He’s now a 6’6″ model and sophomore at the University of West Georgia, but his Momma has a very strong message she wants to give to some of the ladies lusting over her son: ‘NO COUGARS ALLOWED!’ Check out what she said… If you haven’t heard by now, cougars have been damn near throwing their panties at Kairo like they were at a Teddy Pendergrass concert, LOL.  And his protective Moms has relentlessly been trying to fight ’em off every chance she gets. Here’s what Sheree told Daily Dish:

Via BravoTV: “It didn’t seem like it was that long ago that we were on TV, so when I see the playbacks of the kids on the show, they look like they were tiny. So now you have this huge 6’5”, 6’6” guy, super handsome — he’s his mom’s son, but I’m super proud of Kairo. […] “He’s excelling in school, and he’s a student athlete. He’s getting into modeling, so he’s taking that mistake and building off of it in a positive way.”

So in other words ladies, Sheree just ‘loaned’ her son to Fantasia (who is happily married by the way), but don’t think he’s about to start getting with ‘older women’…not as long as his Momager, is on duty.