As if it were not already shocking enough that singer, Faith Evans, has apparently just married her deceased ex-husband’s (Notorious B.I.G.) producer, Stevie J…in comes Stevie’s ever-so-drama-oriented ex-wife, Joseline Hernandez. From the looks of what has just transpired on social media, Joseline is just as shocked by their marriage news, as the rest of us. 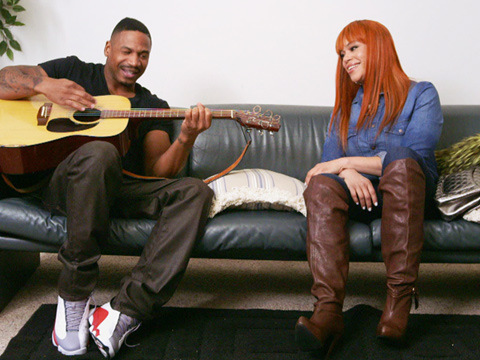 Following the revelation -that Stevie J and Faith applied for a marriage license and reportedly said “I do” in a Vegas hotel room on Tuesday (July 17, 2018)- Stevie’s baby momma, Joseline, has just put him on full blast online. In a shady Instagram post, she revealed that it was just ONE MONTH AGO, that Stevie supposedly asked HER to marry him via text message. She shared a screenshot of the text exchange and apparently she has Stevie’s number stored in her phone under the name, “A$$hole”…Laaawd…

Stevie allegedly texted, “Will you marry me?” to Joseline on June 17th. Joseline responded, “I’m actually trying to marry someone else I really like. I’m sorry. I tried it with you. I’m liking some one else a lot.”

Not quite sure why that extra stank on it had to be added at the end, but it is what it is. Anywho, Joseline then replied back with, “Bonnie Bella is calling,” referring to their adorable 1 year old daughter.

To add insult to injury, Joseline captioned her petty IG post with a sarcastic marital message to the new bride nd groom, Stevie and Faith:

Wonder if Faith is sitting somewhere reading Joseline’s texts and starting to have marriage remorse. I also wonder what Faith’s ex-husband, Notorious B.I.G., would think about her marrying his producer. Matter of fact, I wonder how their former label exec’ and friend, Sean P. Diddy” Combs, is feelin’ about this. Overall, I have so many questions, but I’ll stop here.

Recap Of Their Vegas Matrimony

If y’all missed the latest news about Faith’s and Stevie’s  nuptials and you’re still trying to process their marital union, here’s what we reported earlier:

Via TMZ- Faith and Stevie have already done the deed. Multiple sources at the ceremony confirm they tied the knot in their hotel room Tuesday night … around 10:30 PM. […] TMZ’s learned they’ve applied for a marriage license in Las Vegas. According to docs, the singer and producer filed for the license in Clark County on Tuesday.

That info also goes right along with this photo of them outside of the LV courthouse on Tuesday:

Stevie J. had daughter, Bonnie Bella, with Joseline Hernandez on December 28, 2016. However, by January 2016, Stevie J. said Joseline went into a fit of rage over how much time he was spending in the studio with Faith…then Joseline reportedly cut up and bleached $65K of his belongings. Peep the video:

Not sure if Faith is clear about what she’s now signed up for, by marrying Stevie J. and the colorful drama that comes with him…but then again, how could she not be? Maybe, she’s okay with the drama, because their love supercedes ALL of that…maybe. Congrats to the new Mr. and Mrs.!
LOAD COMMENTS