The legendary Jane Fonda (82) has always been a woman with two passions- she loves acting, but as a human rights activist, she despises White privilege and injustice within America and beyond. Throughout the 1960’s and 1970’s, was when her activism was fully put to the test, as the FBI surveilled her for her support of the Black Panther Party. Fonda supported the civil rights organization in several ways- through financial donations, posting bail money for their political prisoners, and more. In 1970, her support of the News Orleans chapter of the Black Panther Party (BPP) showed just how much of a gangsta she really was and how far she was willing to go, in order to help the BPP fight for the rights of African Americans.

The Dangerous Police Standoff That Led To Fonda’s Help

In October 1970, the New Orleans chapter of the Black Panther moved their headquarters into the N.O.’s Desire Housing Project, following the unjust killing of a teen male by officers in the area. Although the N.O.P.D. along wth the national government and FBI, wanted the Black Panthers eliminated, the residents of the Desire and the surrounding community welcomed their presence with opened arms. The BPP was there to aid the community with food programs, protection from racist acts by law enforcement, racist civilians, and more.

As a result of the love the Panthers showed the community, they, in turn, protected the BPP members when it came time for a stand-off between the N.O.P.D. and several BPP members, who were holed up inside of the Desire apartments.

The November 19, 1970 Desire project stand-off was the result of the government’s attempt to evict the Panthers from the property. Thousands of residents (including children) from the community, stood in front of the Desire buildings to prevent the officers from shooting and killing the Panthers at will. During the ordeal, the BPP members were inside the Desire project and well prepared for war if necessary- equipped with artillery, grenades, etc. The N.O. mayor at that time, Moon Landrieu, tried to talk them into leaving, but they refused unless they offered to help the residents in that community in several ways. Therefore, Landrieu sent bus loads of officers and a helicopter into the community.

The officers finally retreated, after realizing the Panthers would not vacate the premises, nor would the residents back down.

What Fonda Did To Assist Panthers After Police Standoff

Following that Nov. 19 incident, some of the members contacted their longtime supporter, Jane Fonda, to inform her of what went down. By November 24, she was in New Orleans, leading a protest that challenged the Housing Authority of New Orleans for previously denying Black Panther member, Harold Holmes, a right to rent an apartment in the Desire Project without any just cause to do so. Thus, leading to the BPP’s taking matters into their own hands and setting up shop at the Desire project anyway.

Following the stand-off, Jane Fonda also praised the N.O. Black Panthers, in the press, for not backing down from the N.O.P.D.’s eviction attempt, stating:

“How can we smug White people say what Black people should do? We have done nothing for centuries to stop the violence perpetuated against them.”

The next day, on November 25, 1970, some of the Black Panther members, were being surveilled by N.O.P.D. officers. When they learned of the surveillance, they asked Jane to assist them with getting out of the state unnoticed, so they could attend a very important Black Panther organized national convention against injustice. Jane Fonda then rented 4 cars- under her name, with her credit card- for them to leave the state incognito. Unfortunately, the N.O.P.D. officers were also surveilling Fonda and that lead them to the Panthers she’d helped. The officers stopped the Panthers in the four rented vehicles, as they were leaving the Desire project and arrested them for no reason, other than being Black Panthers.

Officer Reveals Run In With Fonda

At the time of her November 1970 visit to New Orleans, Jane Fonda eventually realized that her every move was being trailed by an N.O.P.D. officer. That officer also happened to be Black, but was working against the Black Panthers at that time and he later revealed exactly what happened when Jane came face to face with him. In the book, “Showdown in Desire: The Black Panthers Take a Stand in New Orleans,” Officer Larry Williams recalled how Fonda called him all sorts of names for ‘selling out’ his own people. He also admitted that as an officer back then, they knew they abused their authority against the Panthers. Check out the book’s excerpts below: 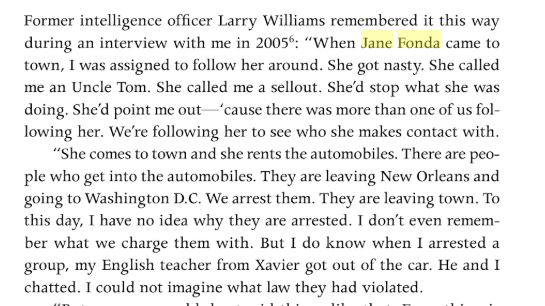 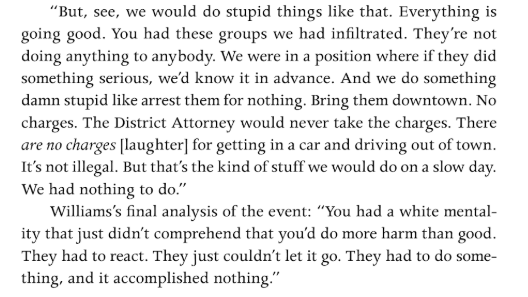 SMH…the more things change, the more they stay the same.