We all remember “Aunt Vivian #1” right? She was the original “Aunt” (before being replaced by the 2nd “Aunt Viv”) to Will Smith on the classic 90’s sitcom, “Fresh Prince Of Bel-Air.” Well, if you’ve been following actress, Janet Hubert, on social media in recent years, then you’re probably familiar with her ongoing beef she has with her former co-star, Will. However, nobody could’ve saw her latest reported rant coming…not in a million years.

Hubert Blames Will Smith For Harming Her Son

Janet done stirred up the internet yet again, after reportedly posting a message to Will Smith, accusing him of being the reason her son has just attempted suicide: 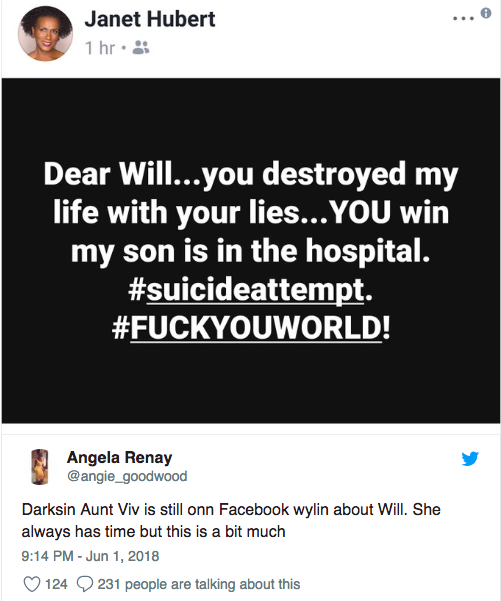 “Dear Will…you destroyed y life with your lies…YOU win my son is in the hospital. #suicideattempt #F*CKYOUWORLD!” the online message read.

As soon as her message began spreading across these social media streets like wild fire, fans started weighing on Janet’s words. Some felt that she had a right to feel the way she does toward Will, while other’s feel that she’s the cause of her own demise:

Joe: Or maybe she was really difficult to work with, and being older and darker had nothing to do with it.

Patrick G: Maybe Janet Hubert it was his up bring. Why are you blaming someone else when you should be looking at yourself. You didn’t like Will Smith on the Show and you still don’t like him. Will Smith didn’t raise your child you did.

Why Janet Can’t Stand Will Smith

Janet’s been slamming Will Smith for decades ow because she blames him for having her fired and lying on her in the press, which she feels ultimately ruined her career. According to EOnline, Will did an interview with an Atlanta radio station in the 1990’s, shortly after Janet left the show, and here’s what he reportedly said:

“I can say straight up that Janet Hubert wanted the show to be The Aunt Viv of Bel Air Show because I know she is going to dog me in the press. She has basically gone from a quarter of a million dollars a year to nothing. She’s mad now but she’s been mad all along. She said once, I’ve been in the business for 10 years and this snotty-nosed punk comes along and gets a show.’ No matter what, to her I’m just the Antichrist.”

Janet’s side of the story:

“My departure was planned for a long time… There will never be a reunion of the Fresh Prince. Will Smith and Alfonso [“Carlton”]destroyed a 20-year-career with untruths. I got slammed.”

How Will Feels Now About Janet Hubert

As we also previously reported, in a more recent interview, Will Smith says he harbors no ill will toward Janet, when he was asked about her nonstop jabs at him:

“I think that both of the Aunt Vivs were really, really fantastic,” he said during an appearance on BBC’s Radio 1Xtra, via The Grio. “I think when you make a show, any time that you make a change it’s going to be excruciating and painful. I think that Janet Hubert brought a really powerful dignity to the show. I think she’s brilliant. I think as an artist there’s so many things that she does. She sings, she dances, she’s like a really powerful artist. I love what she brought to the Fresh Prince.”