Jim Carrey has stirred up a ruckus all up n’ down, over and across social media with his Aretha Franklin tribute and the thing is, it doesn’t quite seem like he intentionally meant harm. But y’all already know that when it comes to our legends, folks on social media will deliver a ‘virtual beatdown’ to whomever disrespects them! That being said, peep what Jim Carrey has done that has him in bad graces with many fans right about now…

When our beloved Aretha passed away on August 16th from pancreatic cancer, Jim Carrey, quickly picked up his paint and easel to show her love and celebrate her legacy in his own way. Unbeknownst to many, Jim has broadened his artistic horizons since his “In Living Color” days. He’s also now a talented, self-taught painting artist, who specializes in his signature caricature style of paintings. Jim has admitted, in the past, that drawing is very therapeutic for him and gives him an opportunity to paint the world as he sees it through his eyes.

His artistic style did not change when it came time for him to whip up a portrait of Aretha, but that’s why many were giving the comedic actor the side eye. On the same day of Aretha’s passing, Jim Carrey took to Twitter to display the artistic piece he’d drawn in her honor. It was a caricature-like image of Aretha and it was pretty creative. However, there was one problem that had many folks scratching their heads- apparently in Jim’s mind, Aretha’s complexion falls somewhere between his and Halle Berry’s, as opposed to the queen’s actual caramel hue. Here is Carrey’s online tribute: 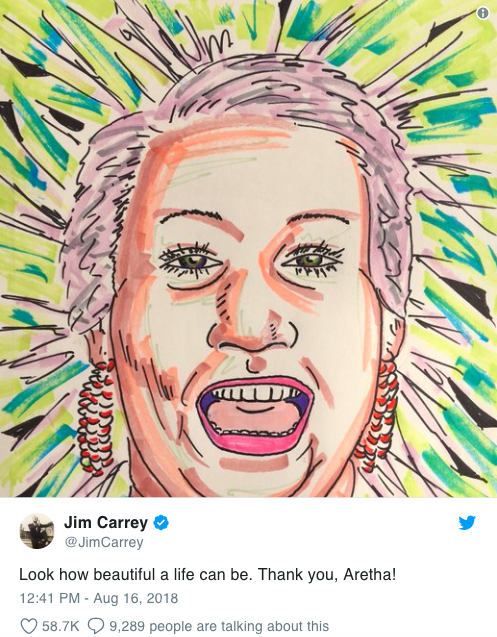 Fans Let Jim Carrey Have It

Like I said, Jim didn’t seem to mean any harm by his brown-paint-deprived-Aretha-painting, it just seems that his view is distorted somehow, or another. When it came to Re-Re’s loyal fans though, if there’s one thing they demand, it’s that Aretha gets all of the R-E-S-P-E-C-T she deserves. So, the last thing they’d want Carrey to do, is attempt to “white-wash” her, as one fan put it. See some of the comments and confusion fans displayed on Twitter below…

@FallonSt***: “thought it was Kathy Bates”

Then there was this:

Although Jim didn’t respond to the comments, a few fans attempted to draw their own conclusions from the comic’s art and also offered an explanation to the others…

@KT2Beeee***: “not white, moving toward the light”

@Bilal_S_Hai***: “she’s moving towards the light from what I can gather, glow on [her] face makes her look white.”

But other fans were quick to rebut that whole ‘light shineth upon thee’ assumption:

@grroc***: “Ya, makes sense! still, black skin doesn’t look white when the light is shine upon it. Just saying.”

Then came the ultimate. One fan took the liberty of ‘fixing’ Jim Carrey’s melanin-deficient-Aretha depiction, by making Aretha’s complexion brown skin tone that she really was and other commenters LOVED this rendition far more:

Even though Jim pissed off many with his tribute, he also received a lot of love from other fans, who simply appreciated the fact that he took the time to create a tribute to the Queen of Soul.