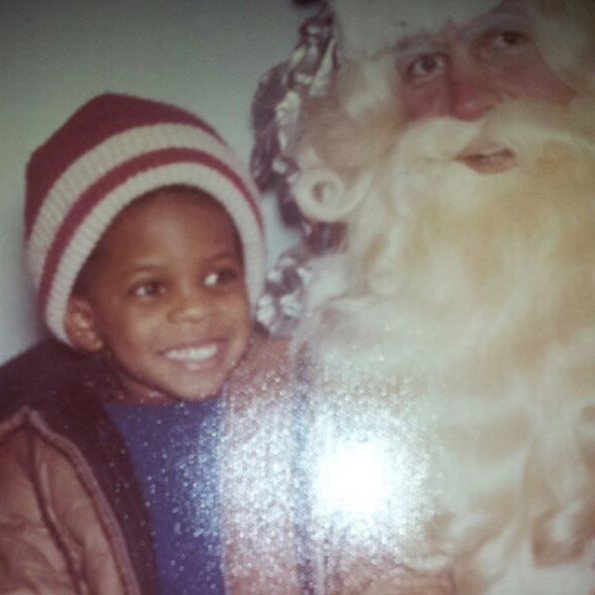 The cool lil’ man chillin’ on Santa’s lap in the above photo, actually grew up to become a 90’s R&B sensation. He also ended up shockingly shooting himself smack dab in the throat and survived! If you know 90’s R&B, you definitely know his song and you probably jammed to it in your ride, or at home on plenty occasions. Truth is, at one point we couldn’t turn on the radio without hearing him blasting through the speakers. Scroll down to see if your guess is any good on this one>>>


Sing it with me now: “Touch me, tease me, feel me and caress me, hold on tight and don’t let go/Baby I’m about to explode’Cause all my love you can’t control!”

Alright, now that we got that outta our system, the kid on Santa’s lap was 90’s singer Case, best known for his hits, “Touch Me, Tease Me,” “Happily Ever After,” and “Missing You.” Every last one of those joints were 90’s classics! And Case is still making music and performing regularly to this day.

A hand clap and an old school fist bump to everybody who got this one right!

Now remember we mentioned that Case shot himself in the throat? SEE WHAT HE REVEALED ABOUT THAT HORRIFYING INCIDENT…

CASE EXPLAINS HOW HE ENDED UP SHOOTING HIMSELF IN THE NECK

In an interview with KissFM radio host, Lenny Greene, Case revealed that he had to take a break from the music industry because of a 2002 incident where he accidentally shot himself in the throat.

Case: “It was a lot of stuff that went on. Originally I was going to take time off to spend time with the family; with the kids, and moved down to Atlanta to be closer to them. During that time I had started working on the album, doing little things here and there just trying to put all the pieces together. Then, I had an accident in ’02 where I accidentally shot myself in the throat, so that put things on home for a minute.”

Case’s gave advice on to prevent a gun accident and he used ex-NFL player, Plaxico Burrus’ 2008 gun accident (where he shot himself in the thigh) as a reference:

“Take all the precautions and check it. Make sure everything’s everything. Hindsight is 20/20, but I made sure I didn’t aim anywhere near Plaxico [Burress] aimed. […] “I’m not even messing with that,” Case said.

Watch his full interview clip above (he talks about the gun accident at the 1:53 mark)…