Who Knew Actor Jeffrey Wright Married & Had Kids With A Known Actress?

Some of you may not know actor, Jeffrey Wright (52), by name…but you definitely know his face. He’s one of the most versatile actors in the game and has played every type of character under the sun. From his portrayal of Martin Luther King in “Boycott;” to the Dominican drug Lord in “Shaft” (2000 remake), where his character delivered his classic pronunciation of tax evasion as “tack e-bay-shun;” to his portrayal of the late painter, Jean-Michel Basquiat, in “Basquiat;” to “Betee” in “Hunger Games” and more, the man has done it all. But another interesting about this brotha, is who his former wife and mother of his children is…

Wright’s long list of acting credits are very extensive, but it’s frustrating that he is one of the more underrated actors in the game. Another thing about him that kind of flew under the radar is that he was married to an actress who has recently been making her mark in the acting game and they have two children together. See if you recognize her.

Jeffrey and British born Nigerian/Scottish actress, Carmen Ejogo (44), were married for 14 years (2000-2014). Carmen is another actress who you may not know by name, but if she looks familiar to you, it could be because you recognize her as the late Coretta Scott King, whom she portrayed twice- in the films, “Boycott” (2001) alongside her then husband, Jeffrey; and in “Selma” (2014).

When Carmen was prepping to play Mrs. Coretta Scott-King, it was Mrs. King who loved her for the role and gave Carmen her blessings. Another memorable role was in the movie, “Sparkle.”

They have two children together, see pics of them here…

Here are pics of Jeffrey and Carmen during happier times in their marriage with their children, Elijah (now 17) and TK (now 13). 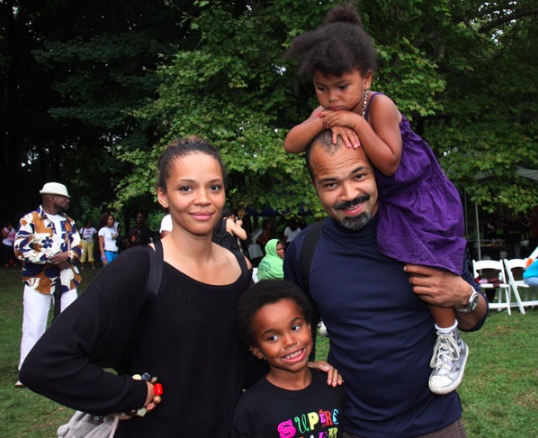 We would have loved to have seen their marriage last, but at least they have beautiful memories to share with their children.