Back in the day, actress, Lela Rochon, had many everywhere diggin’ her when she played “Sunshine” in Harlem Nights in 1989. Remember that? “Sunshine” played that married dude, “Richie,” so good that he ended up calling his wife to tell her “Lookith, I ain’t never comin’ home no more…take it easy.” That had everybody crackin’ up and Lela held her own against heavyweights like Eddie Murphy, Richard Pryor, Della Reese and Redd Foxx.

Then she went on to kill it in her many other roles in 90’s films like Waiting To Exhale, Why Do Fools Fall In Love, and Boomerang and more. But after starring in the 1999 film, Any Given Sunday, Lela started to fall back from the entertainment scene.

Although Lela (53) still continues to act throughout the 2000’s, her roles as a wife and mother have become her top priority. She’s been married to her popular director husband, Antoine Fuqua (51) -known for producing popular movies, like Training Day– for 18 years (since 1992). In 2002 Lela and Antoine had a baby girl named Asia Rochon. She was cute as a button back in in the day, but she’s a teenager now. 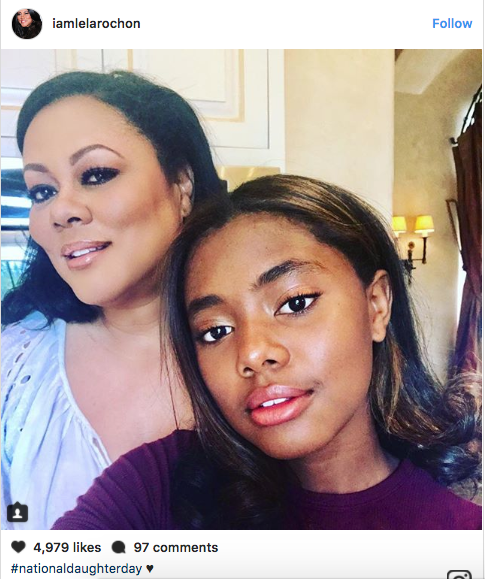 Fast forward to now and Asia is 15 years old and is just as beautiful as her mother. Last year (2017), for ‘National Daughter Day,’ Lela shared a pic of her and Asia glammin’ it up for the ‘Gram and fans were surprised to see how much older she’s gotten.

Asia is also an up and coming model…

Lela and Antoine also have a 13 year old son together, Brando Fuqua, and Antoine has another son, Zachary Fuqua, from a previous relationship as well. See pics the happy fam’ here…

Her Husband’s Directing Skills Are The Truth

In addition to directing the award winning film, Training Day, starring Denzel Washington, Fuqua also directed Denzel in the 2015 movie, The Equalizer, and in the 2016 film, The Magnificent Seven. Some of his other work includes the movies Southpaw (2015), Olympus Has Fallen (2013), and many more. Antoine has also directed music videos for many artists, including Stevie Wonder, Arrested Development and Prince.

Antoine Fuqua (via Huffington Post): “My favorite memory is him coming down those steps. I mean, these are some pretty grand steps. You gotta picture it. It was very light inside, very bright. The steps, I don’t know if they’re marble, or what they were, but all I saw was a red thing coming down the steps, like out of a Fellini thing. And his platforms. And a really tight paisley suit. And I just couldn’t figure out who it was because there were girls all around. He just kind of appeared and floated down the steps. And then he steps close to you and it takes you a minute, if you’re a fan of Prince, to say, ‘Man, I’m standing in front of Prince.’ And you’re thinking to yourself, “How fu*king cool is that, to be Prince? To walk down those steps and say, ‘Hey, I’m Prince?’ I’m like, ‘Wow.’ And he was very cool. He was just easy. He walked me around and showed me. It was cool, man.”