When Single Ladies premiered on VH1 in May of 2011, fans immediately gravitated to the ladies and were sure the show would be around for quite some time. The series, which starred LisaRaye McCoy and Stacey Dash, quickly became a fan-favorite, but things took an unexpected turn after just one season. Stacey Dash abruptly exited stage left and never returned.

After Stacey pulled a ‘dearly departed’ move on ’em, everyone involved with the show were giving fans the sound of crickets whenever they’d ask ‘What’s up with Stacy Dash? Where’s she been?’ Mind you, this was just before Stacey started truly letting the real Stacey Dash surface in public, so many of the show’s fans- primarily African American woman- still liked her…

Stacey did manage to release a politically correct statement shortly after her departure was made public. The actress claimed the filming location was the reason for her decision to leave the show.

“I truly enjoyed playing Val on ‘Single Ladies’, but I have decided to leave the show. I have to be back in LA with my children right now and the ‘Single Ladies’ shooting location makes that impossible. I wish VH1 the best of luck with the show and in maintaining the strong fan base we developed in season one.” 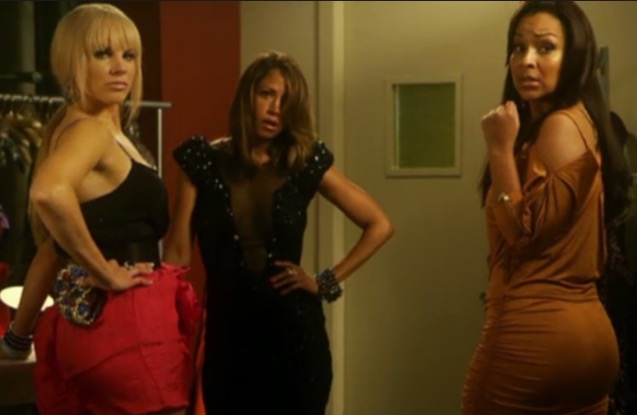 Shortly after Stacey’s statement was released, VH1 followed up with a response to Stacey’s decision:

“VH1 respects Stacey’s decision and her commitment to what she feels is best for her family. We thank her for all of her hard work in making ‘Single Ladies’ a success right out of the gate, and we wish her nothing but the best in her future plans.”

But, despite Stacey’s quiet departure, there was always speculation about the real reason she’d left. Years later, the truth was revealed when LisaRaye spoke out. By now, most fans probably know LisaRaye has never been one to mince words and she definitely didn’t when discussing Stacey Dash. In fact, she admitted she got Stacey Dash axed from the show.

A few months ago LisaRaye finally admitted there was more to it than just Stacey’s ‘location troubles,’ or the watered down version she, herself, had given us years prior. Turns out their altercation on set got heated and Dash had to be checked for trying to get physical with LisaRaye, according to Lisa. Then she basically alluded to having Stacey fired:

“In Hollywood, I’ve learned to be a boss,” LisaRaye said in a clip promoting her appearance on the Centric TV series “Being.” “I had to say to Stacey Dash, ‘If you don’t get your motherf**king finger out of my face…’ So for our second season of Single Ladies, there was a replacement for Stacey Dash.”

LisaRaye also shared details about disputes she had with Stacey and how the conflicts ultimately led to her departure. “Yes, there was a disagreement over a scene. And it really wasn’t with me. It was with the director,” said LisaRaye. “I think it was about 2 or 3 a.m., and we’d been shooting all damn day. Stacey tried to argue with the director about a line. And I’m like: ‘Girl, if you don’t say what the director wants you to say.’ It wasn’t that serious at first, but it went there.”

But, despite all that’s happened, the ladies have managed to put their differences aside and learned to still be amicable, according to what LisaRaye revealed to MadameNoire. She also said she understands their prior run-in was a result of them being frustrated and tired on set at the time and that she has nothing against Stacey, although she did admit that they could probably never be ‘friends.’

As far as the more recent political and societal comments Stacey’s been making lately, Lisa says that she absolutely does not agree with her. However, she did close that message off with a nice-nasty well-wish to ol’ girl, Ms. Dash, and all of her future endeavors- political, or otherwise:

And boom! There ya’ have it ILOSM family!