“Living Single” Legend, Kim Coles, Files For Divorce From Husband Many Didn’t Know She Had

One thing we’ve always dug about Living Single and In Living Color actress, Kim Coles, is her seemingly down-to-earth personality. She’s a very grounded woman, who always appeared to not buy into the Hollywood bourgeois life- even when she was at the height of her career in the 90s.

What we’ve now learned, is that she’s carried that same grounded mentality into her love life, with the man she chose to marry. He’s as far from Hollywood as possible.

Unfortunately, the two are now headed for divorce court, just 4 years after jumping the broom. It’s just been reported that Kim Coles initiated their divorce process, by recently filing the paperwork in court.

At this point, the reason for their divorce is unknown, but since they did not have any children together and were only married for 4 years, it should be a pretty smooth process for both of them. Well…unless they decide to take things to the unfortunate petty levels that Jill Scott’s divorce from her husband of 15 months, Mike Dobson, reached…but, hopefully not.

Anyways, though Kim Coles’ divorce news is disheartening, let us introduce y’all to her husband, who many of her fans never even knew she’d married, and the happier times they shared together…


His name is Reggie McKiver and he is a retired SWAT team officer. Reggie exchanged vows with Kim in 2015, during a small ceremony in the Dominican Republic. Prior to their wedding, he popped the big question to his bride at an Olive Garden Restaurant.

At the time of their wedding, the former “Synclair James” actress shared their happy matrimonial photos on Instagram and captioned them with the following message: 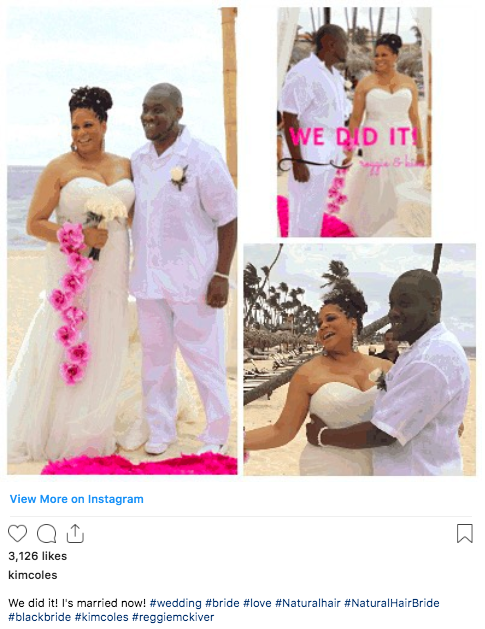 This is Kim Coles’ 2nd marriage…no word yet on Reggie’s prior marital history. Nevertheless, it’s never too late to find love again. So after Kim and Reggie both move past this moment in their union, we sincerely hope that finding new love is in the future for them both…and also for Jill Scott.