LOL! Well Denzel Did Get To “Marry” A Couple At The Oscars!

So we’re still pissed here at ILOSM that the one and only, Denzel Washington did NOT win last night, but we digress. One funny thing did happen last night as a bunch of folks who were on a tour bus got the surprise of a lifetime.

Surprise Of A Lifetime:

On this past Sunday at the Oscars, the host; Jimmy Kimmel decided it was a good idea to trick a group of unsuspecting fans to a surprise in front of an A-list packed audience.

Cell phones in hand, the group snapped selfies with stars like Ryan Gosling, kissed the hands of Meryl Streep and Halle Berry.

Jimmy Kimmel put Denzel Washington on the spot while sitting on the front row with his wife. He made a dream come true for a couple straight off a Hollywood tour bus. 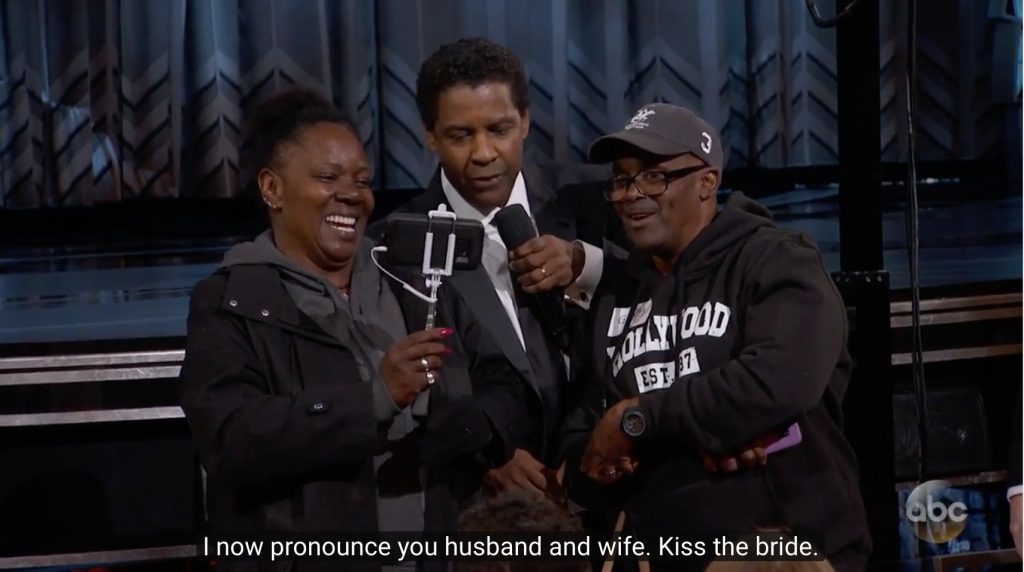 The shocked couple told Jimmy that they were getting married in the summer, so Denzel quickly got up and proposed them “Man and Wife”.

“I now pronounce you man and wife. You may kiss the bride,” Washington said.

I’d say they’ll never get a Hollywood tour quite like that one ever again. Denzel could have put a little more character in his role…or nah???