We don’t do the whole “gossip” thing, but we do talk about VERIFIED stories, either directly from the source’s mouth, or from highly reliable sources and this is verified. This Luther/En Vogue/ Anita feud was something that was written in a biography about Luther’s life, and also one of the En Vogue members confirmed her part in it. All we can say is, Luther didn’t play that!

Word on the Old School curb is that our beloved Luther Vandross had beef with the legendary, Anita Baker and En Vogue back in the day. You’re probably thinking ‘No way, not Luther!’ and that’s the same thing I said, but unbeknownst to many, Luther wasn’t one to be messed with…LOL. En Vogue’s, Cindy Herron, also confirmed this info.

Vandross’ issues with En Vogue all when down back in the day, when En Vogue suddenly decided to leave Vandross’ two-month national tour in 1993. The “official public statement” given to the public at the time, was that their abrupt departure was due to Cindy’s pregnancy, but turns out- THAT AIN’T WHAT HAPPENED!

In an interview with Entertainment Weekly that same year, Cindy spilled the beans when she told EW this: “We’ve been having a lot of problems with Luther…our nickname for him is Lucifer.” She also confirmed that Luther stopped talking to them, ordered that the two camps eat separately while on the road, and instructed his crew to hang drapes so he wouldn’t have to see the group backstage. Ain’t that something?!! LOL. It doesn’t stop there though…according to his 2004 biography, Luther: The Life and Longing Of Luther Vandross by Craig Seymour: “While on tour in Miami, Luther saw that a member of En Vogue had wandered over to “his side” of the drawn curtain. His temper hit full-tilt and he “actually” called the Miami police to demand the group be charged with trespassing.” Luther was a trip, but we still love him anyway!

Now as far as the Luther and Anita Baker conflict, the story goes like this: They were not getting along when they toured together in 1988 and the rehearsals used to be heated. Why you ask? Because Luther admitted that it always bothered him that she wouldn’t sing a duet with him, Baker apologized for not explaining to him about her pregnancy (at the time that he wanted to do a duet with her). So after that, everything was supposed to all good, until Luther felt that Anita did him dirty again. 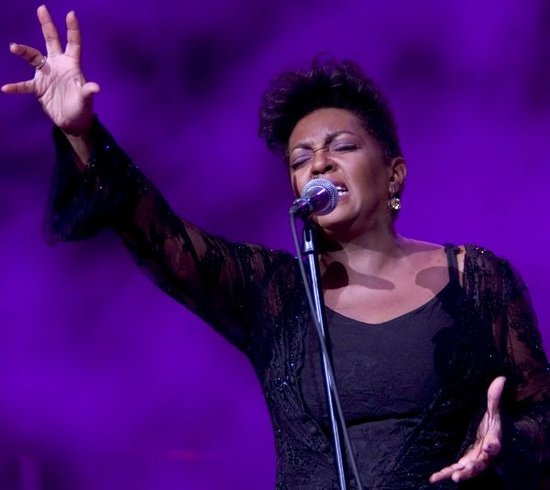 What happened was Luther understood what Anita had explained to him about her pregnancy and felt that what they still needed to record a duet together as a type of peace offering that would permanently squash the beef and all of the rumors they they hated each other. He suggested they do a remake of Ben E. King’s “I (Who Have Nothing). Anita thought it was a good idea and agreed to do it. However, once again things went south between them on the day they were scheduled to record in Los Angeles, because Ms. Anita was nowhere to be found! “She simply didn’t show up,” Luther said. So instead, Vandross recorded the duet with Martha Wash. Luckily, Anita and Luther had already mended their friendship well before Luther’s passing in 2005.

There you have it folks! Further proof that R&B beef was REAL back in the day and even more proof that our favorite Old School artists are human. When many of us think of “beef” we either think of the Wendy’s lady from the 80’s commercials – You know the “Where’s the beef?” lady; or we think of artists like Biggie and Tupac or one of the violent shoot-’em-up-bang-bang-rappers of today, but very rarely would any of us have thought of Luther, En Vogue, nor Anita Baker…LOL. As you see, the beef didn’t start with rap…it’s just that rap took it to a WHOLE ‘nother level.

Rest peacefully Luther- you’ll always be one of the greatest to have ever done it!