Many Impressed By Montel Williams’ Celebrity Son And His Accomplishments

We knew Montel Williams’ son was an adult now, but we had NO idea he’d chosen one of the most unexpected careers for a living! He’s not the kid you see in the above photo anymore. He’s 28 years old now and is most definitely carving out a name for himself in a totally different manner than his Pops.

His career is one that many didn’t think the kid (in above photo)who grew up in a plush lifestyle, living in a quiet, upscale Greenwich, Connecticut neighborhood, would choose. But he sure did shock ’em… 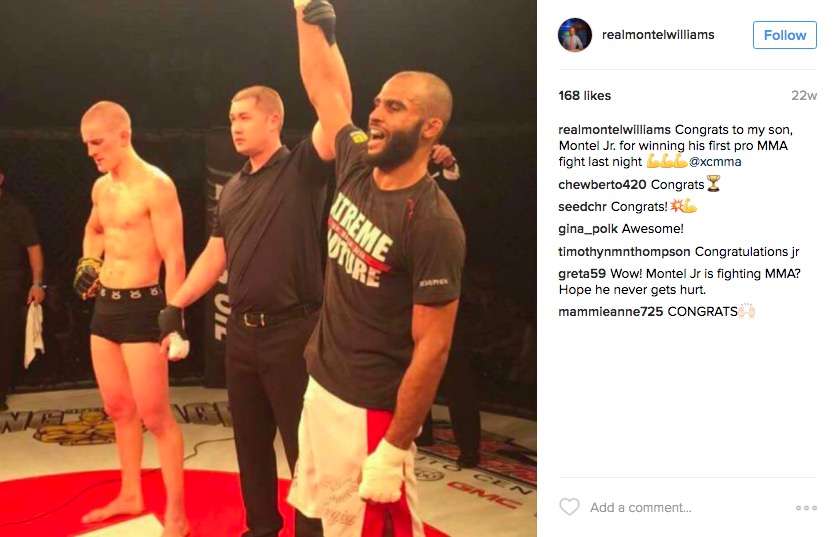 Montel Williams Jr. is now an MMA (mixed martial arts) fighter, which is one of the most brutal contact sports ever! He’s been in the sport for approximately nine years and has beat down some tough opponents in the process. Montel Sr. posted the above photo on Instagram in March of this year (2021) to show how proud he was of his son.

Many wonder why he chose such a violent career, because he didn’t ‘need the money,’ but see why Montel Jr. says he does it below…

MONTELL JR. DOESN’T DO IT FOR THE MONEY…

In an interview with Total Sports Live, Montel Jr. made it crystal clear that he’s not in the MMA for the money, but for his love of the sport:

Sponsors have approached him relentlessly, but his focus is in the art of fighting and having no distractions.

[Montel Jr.]: “… My priority is not making money or being sponsored, just do, destroy whatever warm body they put in front of me.”

Everything about MMA is a challenge and having sponsors will only hinder his focus. In order to be successful in this field Williams Jr. shares his mission.

[Montel Jr.]:“To excel my skills I need to voluntarily go into practice every day and get beaten up, but when you love something you don’t look at it as something that is a challenge or a feat, only the path that you must walk.”


Above is a 2013 throwback clip of Montell Williams Jr. at just 19 years old, beating the breaks off of his then-35-year-old opponent, Jason Weyrich, and winning by tap out (basically the MMA equivalent to the opponent throwing in the towel in boxing matches).
Montel Jr. also made it clear that he would gladly fight his MMA matches in a room, without any lights, cameras, or fans, because he does it for the love and not the fame:

“Posting stuff on IG is hard for me because I don’t do things solely for other people to see them, but unfortunately we now live in a society where ones financial success is partially dictated by the amount of social recognition they receive. Our communities unquenchable thirst for attention deviates the our character, and encourages us to portray ourselves the way we believe other people want us to be. If we solely live for the acknowledgment of others we become what they identify us as, and distance ourselves from who we we actually are. Although I love everyone, I don’t desire anyone’s acknowledgement for my participation in MMA. I would still compete in this sport if no one ever knew that I did. I would gladly fight in a completely empty room.” – Montel Williams Jr.

Montel Jr. likes to spend his free time spreading happiness…literally. He’s dubbed as ‘The happy sign guy’ on social media and has earned that name by standing on random street corners, holding up signs urging people to smile and be happy:
Montel Jr: I hope that happiness is the dictating force in your universe. Master it. I hope you choose to have a beautiful Sunday filled with love. SMILE😃 #thehappysignguy #justsmile

That was really random, but Jr. seems to love it and he’s not hurting anybody…so go for what you know Montel!