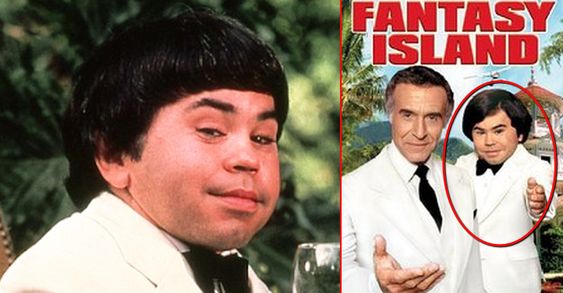 Reminiscing about “Tattoo” from Fantasy Island, sure does bring back some old school memories. His real name was Herve Villechaize and he was the Paris born Filipino actor who stood at just 3’10”, but made a huge name for himself after branding his catchphrase, “De Plane, de plane!” on the show. Anyone aged 40 and up should be familiar with “Fantasy Island” and the way “Mr. Roarke” and his sidekick, “Tattoo,” used to greet guests who came to the island to live out their fantasies. But unfortunately, there was some darkness lurking behind the ‘fantasies’ for “Tattoo”…

Sadly, the way Herve “Tattoo” Villechaize’s life ended is anything but a fantasy. Herve died at 50 years young in 1993 and here’s how. In the wee morning hours of September 4, 1993, Herve committed suicide at the age of 50, by shooting himself in the head with a gun in the backyard of his Hollywood, Ca. home. His then girlfriend,  Kathy Self, was asleep in the home and woke up after hearing the shot fired. She found Herve shortly after and discovered that he’d left a suicide note stating that his health had taken a toll on him and he could no longer handle the pain.


Herve had a long history of health issues that became worse over time due to him having normal size internal organs that were pressing against his tissue due to his miniature sized body.

And according to a New York Times report, Herve Villechaize ‘nearly died during a bout with pneumonia a year [prior to his death]. He also suffered from ulcers and a spastic colon.’

That wasn’t Herve’s first suicide attempt, he actually spoke about a previous attempt to former “What’s Happening” actor, Haywood Nelson, though the video has sense been removed from Youtube.