We’re gonna put this out there before we even get into this story: Here at ILOSM, we do not care if a person is gay, straight, bisexual, purple, has three eyes and a kick stand for a leg. To us, people are people and it is the content of a person’s character that we prefer to judge one by. We salute the late, great Marvin Gaye for standing in his truth and letting the world know what you are about to read. We think that a story like this gives many lessons in tolerance and understanding. With that said, let’s get into the sexual revelation Marvin Gaye revealed to his autobiographer, David Ritz, in Divided Soul: The Life of Marvin Gaye…

Star athlete and now transgender, Caitlyn Jenner (formerly Bruce Jenner), wasn’t the only famous ‘straight’ male cross-dresser, so was our beloved Marvin Gaye. Marvin was not gay, but he publicly revealed the following cross dressing revelation himself, although many people missed it back in the day.
In 1982, Marvin Gaye revealed this in his autobiography:

“My father likes to wear women’s clothing. As you well know, that doesn’t mean he’s homosexual. In fact, my father was always known as a ladies’ man. He simply likes to dress up. What he does in private, I really don’t know-nor do I care to know.” 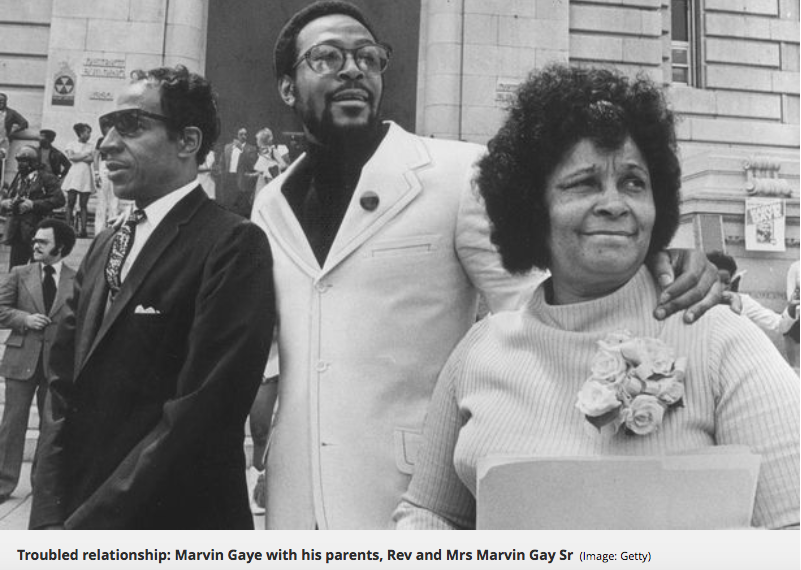 There have been periods when his hair was very long and curled under, and when he seemed quite adamant in showing the world the girlish side of himself. That may have been to further embarrass me. I find the situation all the more difficult because, to tell you the truth, I have the same fascination with women’s clothes. In my case, that has nothing to do with any attraction for men. Sexually, men interest me. But seeing myself as a woman is something that intrigues me. It’s also something I fear. I indulge myself only at the most discreet and intimate moments. Afterward, I must bear the guilt and shame for weeks. After all, indulgence of the flesh is wicked, no matter what your kick. The hot stuff is lethal. I’ve never been able to stay away from the hot stuff.”

Shame and guilt haunted Marvin as a child:

“I wanted to beat the shit out of the guys when they teased me about Father,” Marvin said. “I wanted to smash their faces and cut their throats, but I was afraid. I suppose I was afraid that I was just like him-that I was too much of a woman to fight back. Instead of taking my blows like a man, I ran. My main memories have to do with running. And believe me, I was fast. I loved sports, and I always felt that I had great athletic ability-football, basketball, you name it-but I was scared of the confrontations, so I backed off.”

Did Marvin believe his father was homosexual?

“I didn’t know. I didn’t want to know. I just drove the thought out of my mind.”

Mrs. Gay had this to say when asked if she thought her husband, Marvin’s dad was homosexual. (By the way, ‘Gay’ is Marvin’s original last name and the name his family still used, but Marvin added the ‘E” on the end when he became a singer):

“I’m not certain. I do know that five of his siblings were homosexual. And it’s true that he liked soft clothing. Soft things of all kinds attracted him. He liked to wear my panties, my shoes, my gowns, even my nylon hose. Marvin would see him like that sometimes.”

As you can see, Marvin had some internal struggles that were implanted in him without his consent- whether it was a genetic inheritance from his father, or a learned set of behaviors from his father- it doesn’t sound like Marvin actually wanted it. Nevertheless, he dealt with it the best way that he knew how and truth be told, Marvin Gaye, the icon, became one of the bravest artists in entertainment.

Regardless of how anyone may have judged him about this revelation of being a cross dresser, he proved to have the courage of 1000 lions, by publicly disclosing such personal information.

He was Marvin Gaye- the man who women all over the world were going crazy over, the man whom guys looked up to for his swag, and the artist whose classic hits soul music lovers couldn’t get enough of. To risk all of that, is a display of bravery beyond what many could ever imagine. Job well done Marvin Gaye, your days of ‘running’ were over a very long time ago.