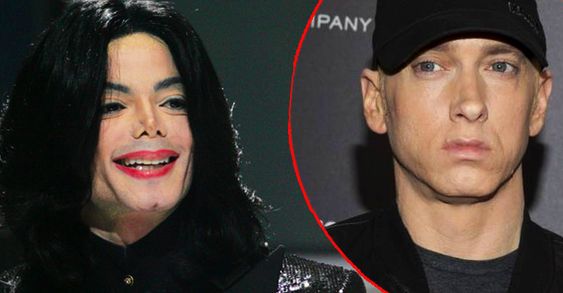 While Michael Jackson was alive, he and Eminem had intense issues. However, as fate would have it, MJ seems to have the last laugh — even beyond the grave.

During Eminem’s early years, you know he didn’t mind taking low-blows at other artists. One of those was Michael Jackson. Jackson couldn’t understand why the rapper targeted him, especially since Michael had never beefed with any of his fellow artists.

Reportedly, Jackson questioned Eminem’s motives several times without taking action against him. However, the rapper persisted. So, that’s when Michael seemingly had enough.

Now, Eminem has toned down…

Yet, it unfortunately took a lot of life lessons for that to happen. Nevertheless, at this point, the rapper claims to have a much better understanding of what Michael Jackson went through, given his own turmoils of recent-past years.

But surely, you want to know how Jackson has the last laugh, right?

If you remember, in 2004, the rapper released a song called “Just Lose It.” In the song, he heavily mocked Jackson from child molestation charges to his hair catching on fire during his 1984 Pepsi commercial shoot.

After the track receiving incredible airplay and him undergoing consistent ridicule, Michael took action. First, he publicly demanded all cable music video stations across the U.S. stop playing Eminem’s video. And they did just that, according to The Guardian.

“I am very angry at Eminem’s depiction of me in his video,” Jackson mentioned at the time. “I feel that it is outrageous and disrespectful. It is one thing to spoof, but it is another to be demeaning and insensitive.”

“I’ve admired Eminem as an artist, and was shocked by this. The video was inappropriate and disrespectful to me, my children, my family and the community at large.”

But This Was The Kick To Eminem’s ‘Crotch’…

One thing Michael understood: he could become your boss without your permission, if he allowed money to do the talking. The Guardian reports that Jackson acquired ATV, a company which housed The Beatles’ entire catalog, for $47.5 million.

But then, Michael turned around and sold 25 percent of ATV to Sony.

“Yesterday’s deal means Sony/ATV own the rights to over 125,000 songs, of which Eminem is one of the most high-profile and profitable,” the source reported in 2007 after the transaction occurred.

The partnership also purchased Famous Music’s catalog as well for $370 million. Martin N. Bandier, Sony/ATV CEO at the time, had this to say:

“The Famous Music catalogue is a world-class asset filled with evergreen songs that people know and love. The depth and breadth of the catalogue is what truly makes it great.”

Eminem Can Now Relate To Michael

Rolling Stone reported that Eminem later participated in an interview with Complex, where he decided to open up about several topics — one of which was drug addiction.

The source says Eminem became heavily addicted to Vicodin, and blamed the drug for his weight gain over the years, during his hiatus. At that point, he fully understood Michael’s situation and claimed that being any celebrity with Jackson’s level of fame could prove fatal.

“I definitely can relate, and it’s a shame if he didn’t have anybody there to just say, ‘Michael, you’re an addict, you need help,'” Eminem told the source.

Once the rapper got clean, he started changing his life — even his own appearance. He was done with the blonde hair.

According to the source, his blonde hair reportedly reminded him of his addiction.

It’s crazy how the tables can turn, right? Life can throw you a curve ball from where you least-likely expect it. Probably in a million years, the rapper would’ve never thought Michael Jackson would own his back-catalog.

All in all, what are your thoughts? If you have any comments, feel free to share them via our Facebook page.