A cousin of Michael Jackson (from his father, Joe Jackson’s, side) — who was a popular ex-drug kingpin/self-proclaimed ‘gangster’ — revealed some shocking information a few years ago. He claimed to have received and offer back in the day to lie on Michael in court. His name was Ron Newt and though he sadly passed away in 2019, his story continues to resonate with many MJ fans.

When Ron’s sons (MJ’s young cousins) then-pre-teen sons’ singing group, The Newtrons, were signed to Joe Jackson’s, Jackson Records. Around that same time, Michael was going through the child molestation trial, in which he was ultimately found not guilty. By that time, Newt said he knew his cousins, MJ and Joe, very well, oftentimes hangin’ out at their Hayvenhurst family home in Encino, CA. But what Ron Newt says he was once asked to do to Michael Jackson was lowdown and thankfully, he ultimately turned it down with the quickness. Peep what he revealed in his interview with Vlad TV (video below)…

Vlad: Now, later on Michael was being charged with the whole child molestation thing and you actually got dragged into the middle of this…

Ron Newt: “Yeah a friend of mine told the National Enquirer he knew some family that knew the Jacksons and they called me on the phone and asked me to come to the hotel. Now me being a playa from the Himalayas, I said ‘I’mma go and see what they talkin’ about, so I can take the information back to Mike and Johnnie Cochran. So I go down there…I say ‘Yeah what’s happenin?’ …I say “What I’m here for? I’m here to help Michael.” They say “Oh no, that ain’t what we want with you. We heard that your boys spent nights at the house and we wanna know if Michael tampered with ’em….just picked them up, or touched them in any kind of way. If he did, we got $200,000 for you.”

V: So they wanted to pay you $200,000 to say that Michael Jackson had molested your kids?

When asked what he would have done if he ever found out that Michael had touched his kids, Newt replied:

“C’mon man I’mma gangster, what you think I would’ve done?”

“If he would have touched my kids? Absolutely. But I love Michael and I know Michael didn’t do that, so he ain’t have no problem worrying about me.” 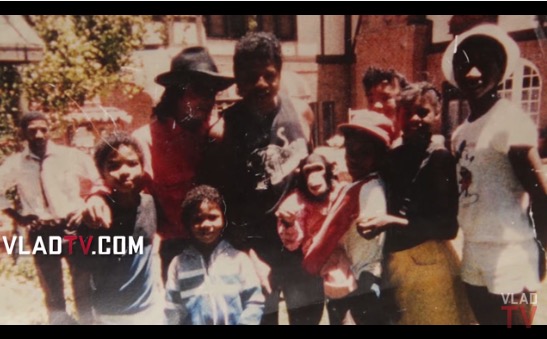 Newt also claimed that The National Enquirer found out he had taken a photo of Michael Jackson and one of his sons right after they’d gotten out of the pool one day at MJ’s house. According to Newt, the publication wanted to turn the photo into something evil, by asking if they could use that photo as ‘evidence’ that MJ had touched Newt’s kids.

If you still have some doubt, you might feel differently after you watch the video below, where MJ’s cousin, Ron Newt, shows the pictures!

This is not the first time we’ve heard about someone being offered money to frame MJ. There have been many conspiracies as to why that happened, with the most consistent one being that the big wigs in the music industry reportedly wanted to ‘silence him,’ by diminishing the major power Michael held behind the scenes in the music game.

You see, MJ outsmarted major music corporations, by ultimately gaining ownership of a huge stake in their music catalogue, which is the bread, butter, and bargaining power for any record label.

ILOSM family, feel free go to our Facebook page to share your thoughts about the allegations made by MJ’s cousin, Ron Newt.