Jackie Jackson’s son, Siggy “Dealz” Jackson (41), had a whole lot to say about the man responsible for his uncle Michael Jackson’s death -due to his negligence- Dr. Conrad Murray. Long story short, Siggy doesn’t like the man and he thinks his uncle got cheated based on that miniature 4 year jail sentence Murray received for MJ’s death. The doctor only ended up serving 2 and a half years of that sentence.

Siggy’s interview is from 2011, just shortly after Dr. Conrad was sentenced and we think his thoughts are probably the most outspoken and real that we’ve seen from a Jackson family member regarding their direct dislike for Dr. Conrad and the anger over MJ’s death.  See what Siggy said below (you can scroll down to watch his interview.

When asked how the Jackson family has been dealing with the whole situation surrounding Michael Jackson’s death, Siggy said in his “Jackson Truth Media” interview:

“It’s always hard to say, because it is…a bunch of mixed feelings. We’re mainly just glad that the case is over with- that my grandmother gets to rest, I mean…the biggest thing [is] Michael’s not coming back. We all have to come to that and to everybody out there you know…we miss him too, we miss him.

As far as Conrad Murray goes- like I said, nobody’s perfect. He got sentenced, but then again we got the American justice system to deal with so, he could be in and out (this interview was done in 2011 just after Conrad was sentenced to 4 years in prison). 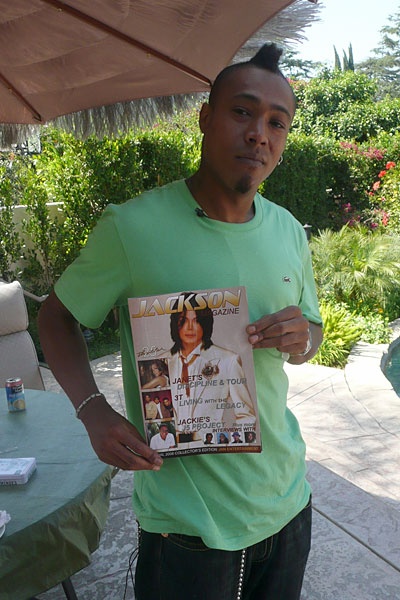 To me…he was a legal drug dealer, but if you bust a drug dealer on the street and you catch him with something, he’s gon’ be serving 5, 10, 15, 20. They gon’ try and put him UNDER the damn jail and bury him in it, [whereas] he (Dr. Murray) just comes and kills a man who was literally putting his life in this man’s hands because he thought he was a doctor…and he killed him and he’s getting little to nothing.

There is no good outcome to it. I can’t sit here and say that I wish him harm, I mean I’m only a human being, [but] IF ME AND HIM HAPPEN TO MEET IN A BACK ALLEY THEN YOU KNOW…WHAT HAPPENS IS WHAT HAPPENS, ONLY ONE OF US MIGHT WALK OUT, but in all truthful, whatever is gonna happen is gonna happen. Put him in public population, let him see what happens, don’t treat him special…I mean, he took a man’s life.

I just really want everybody to remember that…even through what happened with Conrad Murray, just remember what type of person my uncle was. He wouldn’t want us to sit here being mad because life does go on…just …remember the time that you did have with him, remember what he gave to you.”

Ziggy kept it all the way real, but hopefully he won’t ever have the opportunity of running into Conrad Murray in a dark, deserted alley.

1. He is Jackie’s eldest child and he too has a son named Jared Esco Jackson.

2. Siggy “Dealz” Jackson is also a rap artist and he’s always been dedicated to paving his own way in the music game without leaning on his family’s name for help and he even said he’s been on promotional street teams for other hip hop artists while working his way from the ground up. Here is what else he said about that:

“Nothing has ever been handed to me; I have worked hard for everything that I have. I’ve even done street promotions for other artists. It’s important that I do continue to represent my family, but more importantly continue to respect the name and brand that they have worked to build.”

3. Siggy is very passionate about motor race cars, vintage cars and riding motorbikes (on of his favorite past times). He also has a passion and skill for renovating cars. In 2010 he renovated a car in honor of his Uncle Michael. Below is a clip of him discussing the car and his music…