Rock icon, Mick Jagger, has an adult child with former model/novelist, Marsha Hunt. The reason many were shocked to find out about Marsha a while back, is because she’s African American and many were under the false assumption that Mick only preferred White women. Turns out, he had a very deep relationship with Marsha, but it went sour and she has revealed just how crazy things got.

MARSHA BLASTED MICK IN THE MEDIA AFTER HIS NEGLECT

Mick Jagger and Marsha Hunt met in 1969 and by 1970, per Mick’s request (according to Marsha), she was pregnant with their daughter, Karis. That’s when it got ugly and Marsha let the world know just how ugly it was and continued to be decades later.

By the time Marsha was three months pregnant with Karis, Mick must have changed his mind about wanting a child with her, because he had already moved on to the next hot thang- his then blonde live-in chef. Marsha was also living with Mick and after seeing how much he was neglecting her, she moved out and went to the media to let the world know about Mick’s reportedly dirty doggin’ ways.

She publicly revealed how she went through a tumultuous battle with Mick over the paternity of their child. Mick denied he was the father of Karis and he refused to give Marsha any money, with the exception of $322 bucks that Marsha had to reportedly had practically beg him for during the final weeks of her pregnancy because she couldn’t work. She ended up giving birth alone.

There was also one incident where Karis (pictured above, second from left, with Jagger) accidentally burned herself with hot tea as a child and had to be hospitalized. Marsha called Mick for help with the $122 hospital bill, Mick promised to pay it, and according to Marsha, it was a cold day in hell before he ever did. Marsha ended up living in poverty and on welfare with their daughter, Karis, for the first NINE years of Karis’ life.

After Mick’s continued denial of their child, Marsha and her lawyers set up a sting operation to serve Mick with paternity papers:

Via DailyMail: Finally, after trying and failing to persuade him [Mick Jagger] to set up a $40,300 trust fund for the child, Miss Hunt’s lawyers formulated a sting. She arranged to meet Jagger […] and her lawyers jumped out to serve a paternity suit on him. In June 1973, Marsha launched a court action and after three hearings, Mick agreed to pay into a $16,125 trust for Karis, plus $806 a year, in an out-of-court deal.

But Mick, who was a multimillionaire by then, apparently still didn’t pay Marsha that amount and he wanted her to sign papers stating that Karis was NOT his daughter, although she really is his. He eventually got his mind right after this though:

In January 1979, a court in LA ruled that Jagger was the girl’s father and ordered him to pay $1,500-a-month child support. Only then, after not laying eyes on his daughter for five years, did Mick belatedly begin playing a part in her life.

AFTER SURVIVING CANCER, MARSHA HUNT REPORTEDLY PISSED OFF MICK IN 2012 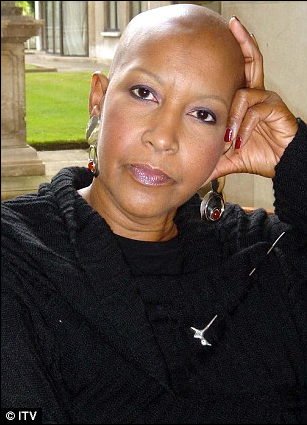 Marsha and Mick became cool again when she was diagnosed with breast cancer in 2004. Mick even attended an emotional hair cutting party she’d thrown, where her close friends each cut off a lock of her hair in preparation for her chemotherapy treatment. Everything seemed all good between Mick and Marsha, from that point on, until 2012 when Marsha auctioned of the many personal love letters Mick had written her in the 70’s for a sum of $300,000.00. Mick reportedly was pissed and Marsha’s response was:

“I’m broke,” she says. “Anyone who has the impression that I have money knows nothing about me. I had friends who came to visit from Pennsylvania and there was no electricity in the house because the bill had been too high.”

Marsha had every right to sell those love letters after all the nonsense Mick Jagger put her through, and on the flip side, it’s great that Mick finally came around and never turned his back on his daughter again. We all live and we learn.