The late Natalie Cole’s sister, Carole “Cookie” Cole, who sadly passed away in 2009 from lung cancer, has a 53 year old daughter whom she was forced to give up for adoption. Carole’s daughter, Caroline Clarke, later became very successful in her own right. She’s a popular journalist for her in-laws’ company, Black Enterprise, and in 2002, she decided to search for her birth parents to find out their medical history. That’s when things got real and the Cole family secret started to unfold. Caroline wrote about this in her memoir and the details are below.

At 37, Caroline Clarke was a successful journalist and happily married mother of two who thought she knew everything she needed to know about her life. Then she discovered her grandfather was the unforgettable Nat King Cole.

She also realized that as a teenager, she’d unsuspectingly spent a night under the luxurious roof of her grandmother’s (who was really her biological aunt) penthouse apartment at the Ritz-Carlton hotel in Boston, as a guest of the daughter of the late, Nat King Cole when she was 17 years old. The girl, who was actually her biological aunt unbeknownst to both of them, was one of her best friends in college.

Clarke suddenly remembered the odd questions that Cole’s widow, Maria Cole, had asked her that night. When was her birthday? What was the name of the Manhattan hospital where she was born? Had she been adopted immediately as an infant? Cole had her reasons, as Clarke, now host of the syndicated TV show “Black Enterprise Business Report,” would learn in pursuing the hard-to-believe, but entirely true story she tells in “Postcards from Cookie: A Memoir of Motherhood, Miracles and a Whole Lot of Mail.” 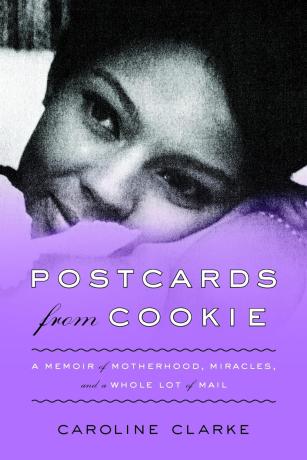 Clarke uncovered that on Christmas Day 1964 she had been born into Hollywood royalty, but her identity was a shameful secret that could only be kept by placing the baby in the arms of strangers. Later, she found out that her grandmother (Natalie Cole’s mother and Nat King Cole’s wife, Maria Cole), was a fierce guardian of the family’s reputation and wouldn’t risk her husband’s career being tarnished by the scandal of an out-of-wedlock pregnancy.

Clarke didn’t believe it when she first heard it. Black families didn’t give up their babies in that era — particularly when they had the means to support them.

The woman at Spence-Chapin Adoption Services had been supplying personal details about Clarke’s biological mother — though not her name. Clarke’s mother had told the staff stories of her life with her show-business parents, who traveled the world.

Clarke told the social workers “It sounds pretty far-fetched, don’t you think? You’re painting a picture of very serious wealth here. These are black people. In 1964. Maids, mansions, chauffeurs, prep schools, and debutante balls . . . what are the chances that this is all true?”

In fact, at the time the Coles…